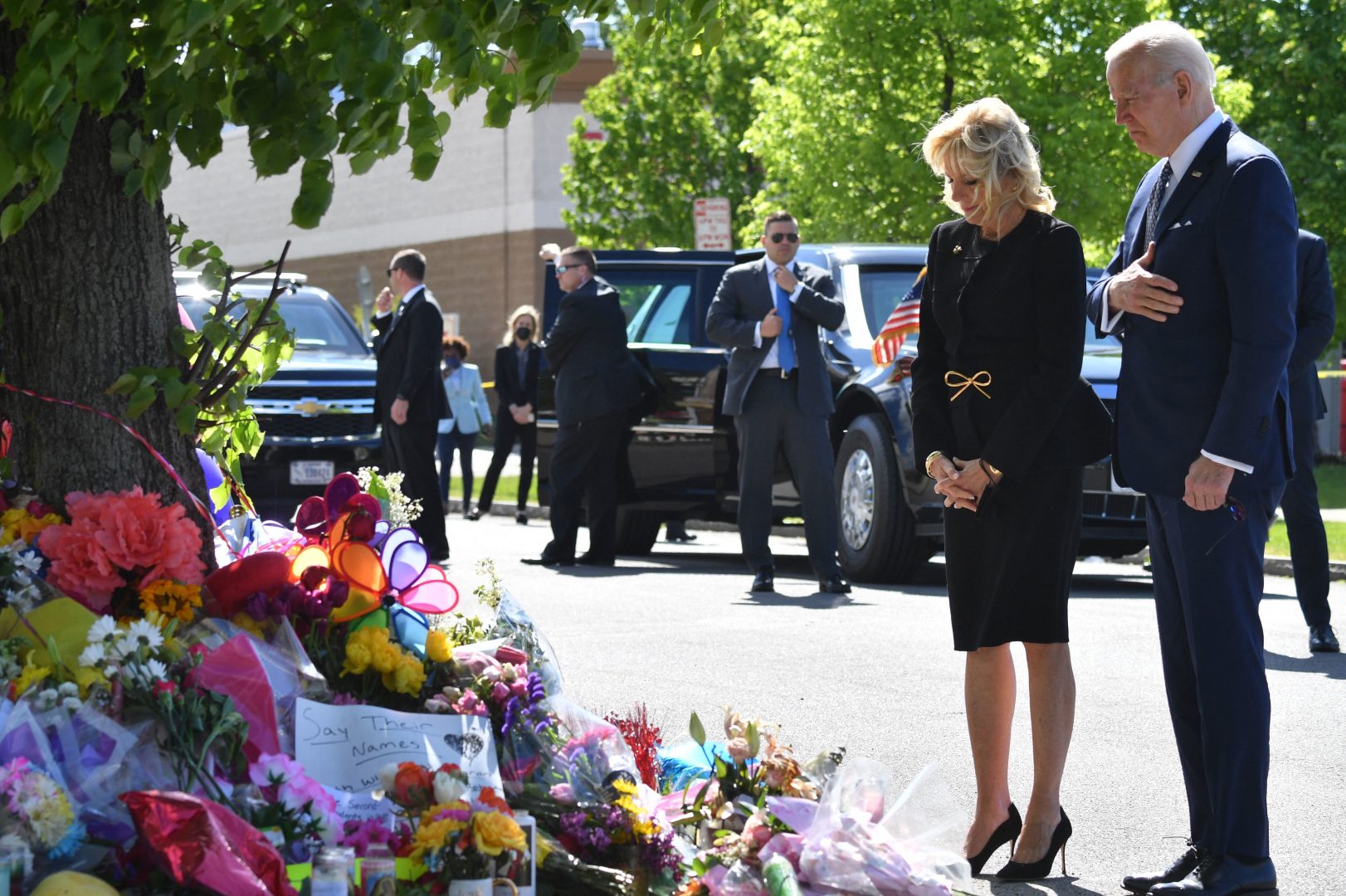 Politicians, celebrities, activists, government officials, and people across the country are speaking out and following the deadly supermarket shooting this past Saturday in Buffalo, New York that left 10 people dead and three others injured.

Given that the store is in a predominantly black neighborhood and that 11 of the 13 people shot (dead and wounded) were black and two were white, law enforcement officials in Buffalo have called the supermarket shooting a hate crime.

“This is pure evil, a racially motivated hate crime," John Garcia, the sheriff of Erie County, stated in a news conference that took place hours after the shooting.

Stephen Belongia, the head of the FBI’s agency in Buffalo, told reporters at the same news conference that the agency is investigating the attack as “both as a hate crime and racially motivated violent extremism.”

The Buffalo Supermarket Massacre is the latest mass shooting in which authorities have stated that hate was the main reason behind the perpetrator’s intentions to commit the atrocious crime. Other recent, high-profile, and hate-filled mass attacks include the 2019 Walmart shooting in El Paso, Texas; the 2015 Emanuel African Methodist Episcopal Church shooting in Charleston, South Carolina; the 2016 Pulse Night Club Shooting in Orlando, Florida; and the 2018 Tree of Life Synagogue Shooting in Pittsburgh, Pennsylvania.

The gunman, Payton Gendron was arrested and charged with first-degree murder on multiple counts. Gendron, who wore body armor and military-style clothing, had a head-mounted camera attached to the top of the military-grade helmet that he wore so he could live stream the attack via Twitch.

Two days prior to the shooting, Gendron reportedly wrote an 180-page manifesto in which he describes himself as a fascist, a white supremacist, and an anti-Semite. The 18-year-old claims to have been radicalized on the controversial website 4chan during the beginning of the COVID-19 pandemic.

The hate-filled manifesto also promotes the “great replacement" theory, the white nationalist far-right theory which claims that white people are being subjected to genocide via immigration and decreasing white birth rates.

Gendron wrote in the manifesto that the main reason why he selected the Tops Friendly Markets Store in Buffalo’s Kingsley neighborhood was due it being the city with the most black residents that was closest from his home. Gendron is from Conklin, New York, which is about 200 miles and a three-and-a-half-hour drive from Buffalo.

On May 17, President Joe Biden and First Lady Jill Biden traveled to Buffalo to visit the scene of the racist and hate-filled crime and to pay their respects at a memorial site for the victims. At the memorial site, the First Lady placed a bouquet of flowers.

CNN reported that the Bidens were joined at the memorial site by Kathy Hochul, the Governor of New York, and both United States Senators from New York: Chuck Schumer, who is also the current Senate Majority Leader, and Kirsten Gillibrand.

In addition to issuing a lengthy statement after the massacre occurred on Saturday, President  Biden issued additional remarks during his visit at a Buffalo Community Center with local leaders, calling the events of Saturday “an act of domestic terrorism”.

"White supremacy is a poison. It's a poison running through our body politic, and it's been allowed to fester and grow right in front of our eyes. No more," Biden said. "We need to say as clearly and forcefully as we can that the ideology of white supremacy has no place in America."

In addition to the statements made by President Biden and Buffalo Law Enforcement Officials, see how politicians (former and current), celebrities, and activists are reacting to the racist, hate-filled Buffalo Supermarket Shooting below:

-Senator Kirsten Gillibrand (D-NY): “I am heartbroken for the victims of today’s shooting in Buffalo, and am praying for their loved ones and first responders.

We must do more to address the scourge of racism and anti-Semitism, and to pass commonsense gun safety measures to keep our communities safe.”

-Senate Majority Leader Chuck Schumer (D-NY): “I ache for the victims and their families. I ache for Buffalo. I ache for the tight-knit East Side community. Racism has no place in our state or our country.

I’ve spoken with the Mayor of Buffalo and offered any help we can provide. We stand with the people of Buffalo.”

-Kathy Hochul, Governor of New York: “[Buffalo] is my community. I know this community well, I've walked these streets. I know the individuals who live here. It's a wonderful tight knit neighborhood. And to see that sense of security shattered by an individual, a white supremacist who has engaged in an act of terrorism and will be prosecuted as such - it strikes us in our very hearts to know that there is such evil that lurks out there.”

-Josh Allen, Buffalo Bills Quarterback: “Extremely hard to express the emotions right now. Absolutely heartbroken for the victims and their families, and for the City of Buffalo.”

-Justin Bieber, Singer: “There's so much division in this world. So much racial injustice. And as you and I both know, racism is evil and it is diabolical. But what you and I get to do, is we get to be the difference makers. We get to be the people who continue to have the conversations with our friends and our families and our loved ones, who continue to be allies."

Note: Bieber’s comments were addressed to the audience of his already scheduled and sold-out concert in Buffalo, which took place just hours after the shooting.

-Former First Lady, Senator, and Secretary of State Hilary Clinton (D-NY): “It should not be hard for elected officials and candidates to disavow paranoid white supremacist fantasy like "great replacement" theory. It should be a bare-minimum requirement for engagement in politics.”

-Molly Jong-Fast, Writer: “Maybe, just maybe it’s too easy to get an AR-15 in this country?”

-Viola Davis, Actress: “I am as tired of posting about these mass shootings as you are tired of reading about it. But....here we are once again. Many families are getting brutal phone calls today. I feel for THEM! Don't even know who or what to appeal to anymore to make it stop!! I mean.....WTF.....WHERE ARE WE???!!!!!”

-Mark Hamill, Actor: “How long should we wait after a mass-shooting, the usual expressions of "thoughts & prayers" & the inevitable outraged cries for more sensible gun laws, before we go back to posting food-pics?”

-Selena Gomez, Singer and Actress: “My heart is broken by the horrific attack in Buffalo. Social media companies have not done enough to deal with hate.”

·       Samuels, Brett. "Biden to Visit Buffalo on Tuesday in Aftermath of Shooting." The Hill, 16 May 2022, thehill.com/news/administration/3489347-biden-to-visit-buffalo-on-tuesday-in-aftermath-of-shooting/.