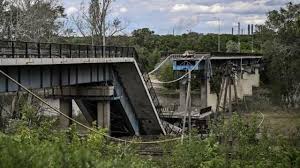 Local sources reported on Sunday that Russian forces blew up a bridge connecting the besieged Ukrainian city of Sievierodonetsk to a city across the river, cutting off a possible evacuation route for people.

The war for control of Ukraine's eastern province of Donbas has centred around Sievierodonetsk. Since the Kremlin launched its invasion on Feb. 24, parts of the city have been decimated in some of the worst fighting.

On Sunday, the governor of the Luhansk region, Serhiy Gaidai, claimed that Ukrainian and Russian soldiers were still fighting street-by-street.

Russian forces have overrun most of the city, but Ukrainian troops still control an industrial region and a chemical factory where residents are sheltering.

"The key tactical goal of the occupiers has not changed: they are pressing in Sievierodonetsk, severe fighting is ongoing there - literally for every meter," Ukrainian President Volodymyr Zelenskiy said in his nightly video message, adding that Russia was attempting to transfer reserve soldiers to the Donbas.

According to Zelenskiy, the image of a 12-year-old boy hurt in a Russian strike has become Russia's enduring global face. "These very facts will underscore the way in which Russia is seen by the world," he said.

According to Gaidai, Russians destroyed a bridge connecting Sievierodonetsk and its twin city of Lysychansk across the Siverskyi Donets River.

Only one of the three bridges remained intact.

"If after new shelling the bridge collapses, the city will truly be cut off. There will be no way of leaving Sievierodonetsk in a vehicle," Gaidai noted the lack of a cease-fire agreement and agreed-upon evacuation routes.

Severodonetsk is the only Ukrainian-controlled city in Donbas' Luhansk province, and its fall would be a major strategic setback. Victory for the Russians would bring them closer to achieving one of Russian President Vladimir Putin's stated objectives in what he refers to as a "special military operation."

Rockets fired from the Black Sea near Chortkiv partially destroyed a military complex and injured 22 people, according to Ternopil's governor. There were no weapons stored there, according to a local authority.