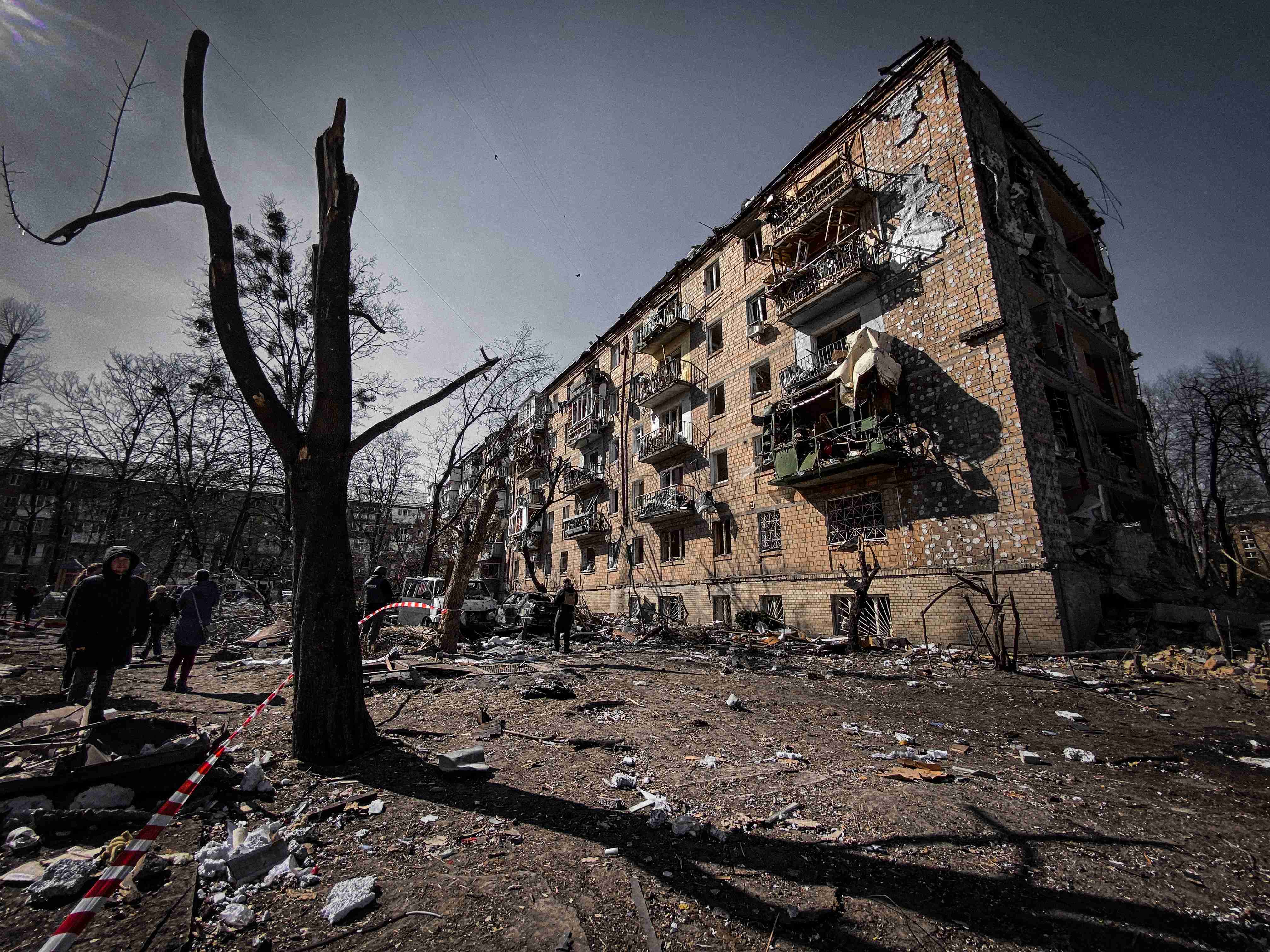 Russia has fired scores of missiles into Ukraine, sending people rushing to shelters and knocking out power in what is considered the most extensive bombardment since the war began.

The attack started at 7 am on Thursday, and Ukraine’s military said it was shot down. Blasts were heard in the cities of Kharkiv, Odesa, Lviv, and Zhytomyr, and air raid sirens rang across the country, but in capital city Kyiv, these sirens sounded for five hours — the most extended alarm since the start of the war.

“Senseless barbarism. These are the only words that come to mind seeing Russia launch another missile barrage at peaceful Ukrainian cities ahead of New Year.”

In Kyiv, emergency workers searched through the smoldering wreckage of a residential home destroyed by the blast, and footage shows smoke trails lingering in the sky. In Kharkiv, Ukraine’s second-largest city, firefighters worked to extinguish a large blaze at an electricity station and in Zaporizhzhia, a southern city of Ukraine, a missile left a vast crater.

“I woke up to everything shaking, crumbling. I got up and screamed, ‘Vitia, Vitia (my husband), where are you?’ I ran barefoot on glass. He appeared and glass was falling off him,” said 60-year-old local Zaporizhzhia resident Halyna.

Brigadier General Oleksiy Hromov of the Armed Forces of Ukraine said the missiles fired at "critical and energy infrastructure facilities in the eastern, central, western and southern regions”. The Mayor of Lviv noted 90% of the city had no power, while 40% of residents in Kyiv live without power.

This missile bombardment occurred in light of Russia’s rejection of the Ukrainian peace plan envisaging Russia to respect Ukrainian territory and withdraw its troops. Moscow dismissed the plan insisting Ukraine must accept Russia’s annexation of the four regions — Luhansk and Donetsk in the East, and Kherson and Zaporizhzhia in the South. Russian officials also stated Ukraine must accept the loss of Crimea, which Russia annexed in 2014.

“There can be no peace plan that does not consider today's realities regarding Russian territory, with the entry of four regions into Russia", Kremlin spokesman Dmitry Peskov said.

Ukraine’s intelligence chief, Kyrylo Budanov, told the BBC despite not having enough missiles, Russia will find sources of support to continue launching attacks on Ukraine.

"The defense industry cannot produce enough for many missile strikes. This is another reason why they are now trying to find missile weapons in other countries of the world.”

“Can they do this long? No, because there are not many missiles left,” Mr Budanov said.

UK’s ambassador to the UN, Dame Woodward, said Russia is attempting to source ballistic missiles from Iran and weaponry from North Korea.

“[I am] almost certain that Russia is seeking to source weaponry from North Korea [and] other heavily sanctioned states, as their stocks palpably dwindle,” she said.

On the other hand, a Russian regional governor said Ukraine had launched attacks on Russian military bases twice this month.

Prospects of talks to end the war remain low, given the direction both countries have taken throughout the year. However, predictions by analysts and the country’s leaders themselves are swaying both sides. Some contend Ukraine will win the war; others argue that because Russia is sourcing missiles from other countries, they have a more excellent hold over the outcome.

What becomes lost within these political discussions is the experiences of innocent civilians and the urgency of their safety and quality of life. The international community is mainly in support of Ukraine and continues to condemn the violence posed by Russia.

Ukrainian President Volodymyr Zelenskyy, in a video address, urged Ukrainians to hug loved ones, show their appreciation for friends, thank their parents, and rejoice with their children more often.

"We have not lost our humanity, although we have endured terrible months. And we will not lose it, although there is a difficult year ahead,” Mr Zelenskiy said.