Russia- In danger of repeating its past? 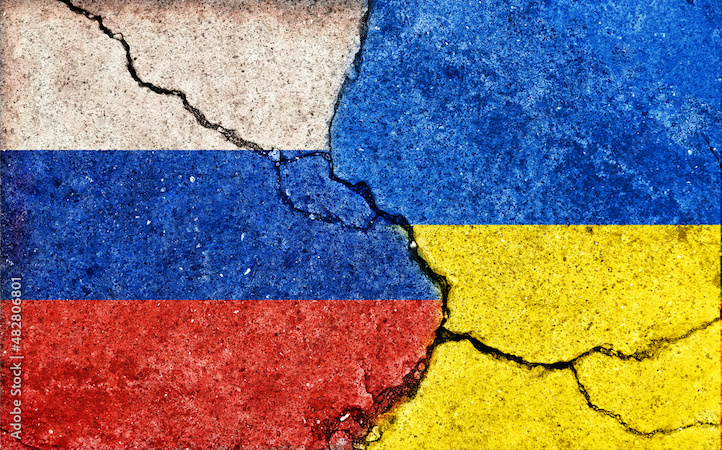 The interest Vladamir Putin had in invading Ukraine seemed rather odd at first, but as more evidence of the why comes to light, perhaps Russia’s history can help.

Skopin believed it beneficial to educate his students on the horrors of Joseph Stalin, the Soviet Union leader in Russia’s long history, which landed him in hot water when he attended a rally considered ‘unsanctioned’.

Earlier on the day of the Rally, President Vladimir Putin had declared ‘partial mobilisation’ across the country. During the demonstration, Denis was arrested and spent just over a week in jail.

The University Order called for his sacking and referenced his participation in the rally against the Kremlin's decision to draft Russians to fight in Ukraine, stating that “The act committed by the employee is immoral and incompatible with the implementation of educational functions and the continuation of this work.”

The detention centre on Zakharyevskaya Street, where Denis and others were incarcerated, pressured them to submit a summons to the military registration and enlistment office before they left.

For simply pointing out parallels between Stalin and Putin's current assault of war against Ukraine, Skopin was released to find himself fired by the university and was only allowed a few days to say goodbye to students whom he still cares about.

"Freedom of expression in Russia is in crisis…All kinds of freedoms are in deep crisis."

“After I was released from detention, I worked for three more weeks. The university sent me letters asking me to explain my absence. I replied that I'd been arrested for participation in a protest and put in detention. Then the Human Resources department called me and told me that I'd been sacked.”

Denis made this speech to them when it came to the final hours of his last teaching day with the students.

“What is an immoral act? Acting against your conscience and passively obeying someone else's orders. I acted according to my conscience. I am sure that the future of our country belongs to you."

“Many people in Russia don't dare to protest because they risk being punished for it. But many would like to. And, for these people, providing approval to those who do protest is a way of disagreeing with what is happening in Russia.”

“Locked up with me in the detention centre there were IT specialists, scientists, doctors, teachers and students. Many of them are now abroad. Like my cell-mate, a young talented mathematician.”

“About 25% of my immediate colleagues have already left Russia. They left after 24 February. Some of them left immediately, some left after mobilisation was declared. I think Russia is losing the best people now. The most educated, the most energetic, the most critically thinking people are leaving the country (For their safety). In short, Russia is going in the wrong direction.”

The parallels between current president Putin and Stalin are stark. In fact, just across the town, there is a monument to the victims of Joseph Stalin's Great Terror.

The monument is made out of a large rock from the remote Solovetsky Islands, home to one of the most notorious forced labour camps of the Gulag. Solovki camp was set up to imprison political prisoners alongside other convicts.

Like how Skopin and many others were imprisoned for merely protesting their rights and the betterment of others, Stalin treated many who did the same things as political pariahs and shot or permanently imprisoned them.

Stalin led Soviet Russia into the Nuclear age and was editor of the Bolshevik newspaper Pravda before eventually becoming Russia’s Dictator after Lenin’s death.

Under his iron grip (With Stal meaning Iron in Russian, a name he adopted after discarding his original Georgian one.) He was the cause of thousands of deaths, mostly peasantry, who were forced out of their livelihoods by police forces.

Uncooperative peasants were arrested en masse, shot, exiled, or absorbed into the rapidly expanding network of Stalinist concentration camps and worked to death under atrocious conditions.

Collectivisation caused a great famine in Ukraine, and Stalin’s policies, some of which targeted Ukraine specifically, compounded death and misery. Stalin continued to export the grain stocks that a less cruel leader would have rushed to the famine-stricken areas. In Ukraine, this famine came to be known as the Holodomor, from the Ukrainian words for hunger (Holod) and extermination (Mor). During these years, some 10 million peasants may have perished through Stalin’s policies.

This entirely sounds like what Putin has done to Ukraine’s farming and refining industry with the war, trying to control Ukraine as Stalin and his secret police forces once did.

In fact, Stalin was widely acknowledged by enthusiastic contemporary foreign witnesses, including Adolf Hitler and such well-known writers as H.G. Wells and George Bernard Shaw, and his popularity has risen even more in Putin’s Russia, with ‘merchandise’ being available to buy, highlighting his greatness against the Nazis. 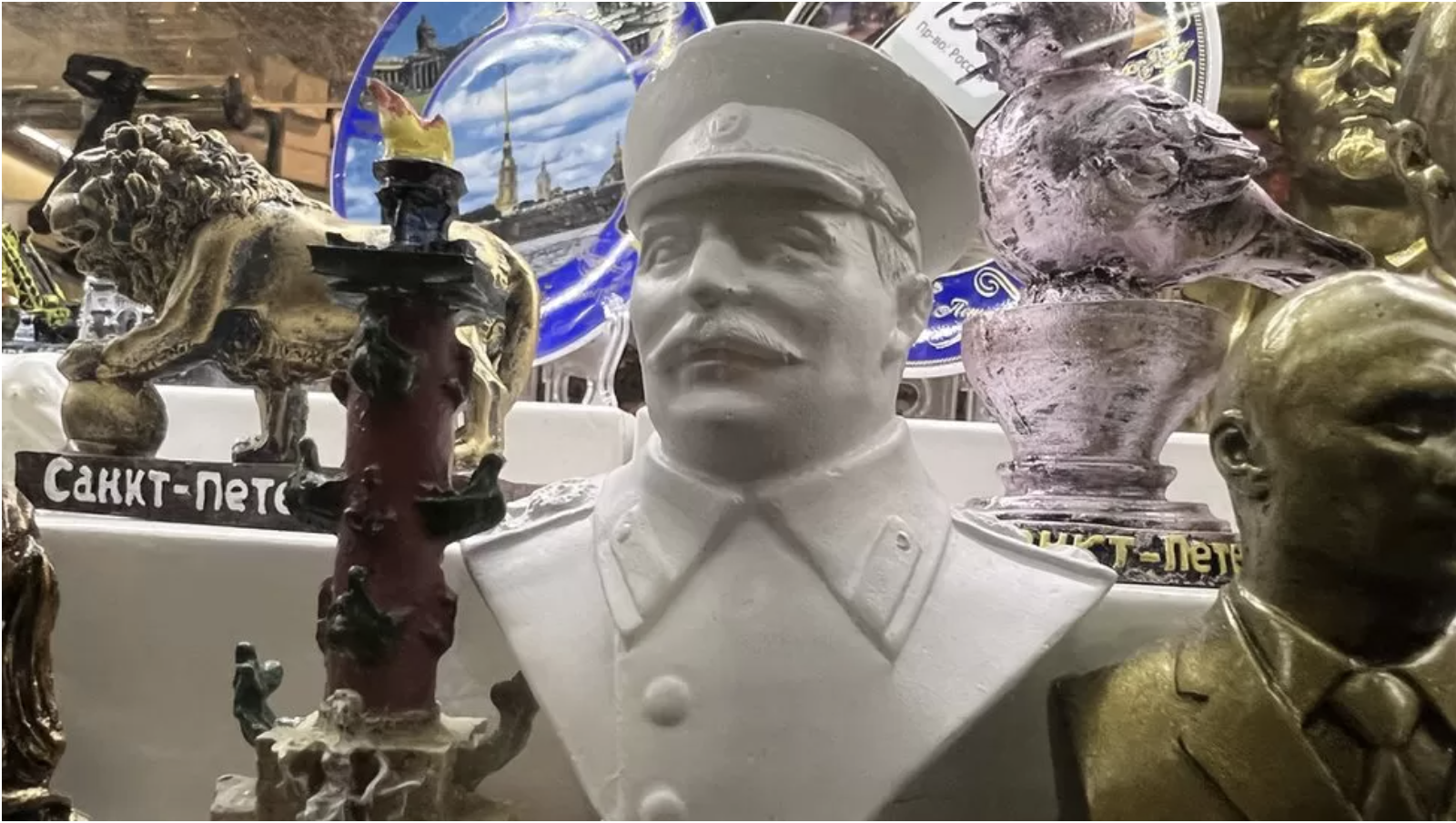 The authorities today place less emphasis on the darker chapters of the Stalin years. At the same time, Stalin is often portrayed as a strongman who defeated Nazi Germany and turned the Soviet Union into a superpower. Putin's Kremlin seeks positives in the past - victories.

"Unfortunately, our country didn't turn over this page properly. Stalin's repressions were not talked about enough or fully condemned. This is why the war in Ukraine is happening today," says pensioner Ludmila, who has come to lay flowers at the Solovki Stone.

"Experience shows that remaining silent leads to bad things. We mustn't forget the bloody stains of our country's history."

Stalin’s years in power are familiar to Skopin, who has studied them. He sees parallels between then and now.

"I just published a book in English about how people in Stalin's Russia removed from group photographs those who were declared 'enemy of the people'. Colleagues, friends or even close relatives had to remove all signs of them from photographs. They did it with scissors and with ink.

"The faculty where I taught had a partnership with Bard College, an American liberal arts college. Last year Bard College was declared an 'undesirable organisation' in Russia. So, our faculty broke the partnership and the Bard College name was removed from the stands displayed in the corridors of our faculty using exactly black ink. In the same way as in Stalin's Russia."

If, as Denis claims, his students ‘understand very well’ what is happening in Russia and Ukraine, that raises a question…

‘How are young Russians being convinced otherwise?’

A new patriotic lesson has been introduced into schools across Russia for all schoolchildren: "Conversations About Important Things." It is not part of the official curriculum, but it is the first lesson on a monday morning and children are strongly encouraged to attend.

What ‘important things’ are discussed there? Well, when President Putin played the teacher in Kaliningrad in September, he told a group of children that Russia's offensive in Ukraine aimed to ‘protect Russia’, and described Ukraine as an ‘anti-Russian enclave.’ You can see which way the ‘Conversation’ goes.

According to Freedom House, which did the statistics for many countries based on the available freedoms of their people in brief,

The invasion of Ukraine is an attack on democracy: Vladimir Putin cannot tolerate Ukrainians’ aspirations to build a democracy on Russia’s borders and has launched a war of aggression to prevent this from happening.

There is no legitimate justification for this war: Vladimir Putin is lying to the Russian people, and the world at large – Ukraine poses no threat to the Russian Federation. Russia's actions represent a textbook example of what authoritarian governments are capable of doing and underscore the importance of defending democratic freedoms around the globe.

We are watching a humanitarian crisis unfold: The military assault against Ukraine by Russian forces is exacting a heavy humanitarian toll – including a refugee crisis – that will extend well beyond both countries’ borders.

Russia and its enablers should be punished: Among the actions that should be taken – the UN General Assembly should move to suspend Russia’s veto on the UN Security Council, Belarusian dictator Alexander Lukashenka should be held accountable, economic sanctions should continue to be escalated, and assets controlled by Putin and his enablers and located in democratic regions should be seized.

Even the quality of life for those living in Russia is at risk if they oppose Putin and the Kremlin’s way of thinking.

Russia’s score for Freedom is just nineteen out of a hundred on the global freedom scale, just for Political rights and Civil liberties alone.

Putin, originally the country’s Prime minister, initially received the presidency on an interim basis from the retiring Boris Yeltsin at the end of 1999.

He served two four-year presidential terms from 2000-2008, then remained the de facto paramount leader while working as prime minister until he returned to the presidency in 2012, violating the constitution’s two-term limit.

A constitutional amendment in 2008 extended presidential terms to six years and a 2020 amendment allowed Putin to run for an additional two terms, meaning he could remain in office until 2036.

Had the arrest and detention of leading opposition figure Aleksey Navalny in January was out publicly, which resulted in some of the largest protests in a decade.

Authorities used excessive force against the demonstrators, and more than 11,500 people were detained.

The September elections for the Duma, the lower house of parliament, were marked by extensive irregularities, according to election observers and independent media. The official results left the ruling United Russia party with a substantial supermajority.

Authorities significantly expanded existing legal restrictions on “undesirable” and “extremist” organisations as well as “foreign agents,” contributing to an increase in censorship of the internet and social media and culminating in the forced closure of the respected human rights organisation Memorial International.

As Russia continued to experience a severe outbreak of COVID-19, with more than 10 million confirmed cases and 300,000 deaths, according to official statistics, independent experts argued that those figures were artificially low.  Because of this, it is thought the low vaccination rates in Russia were attributed partly due to a lack of trust in the government.

With everything happening in Ukraine, sending shockwaves of Russia’s behaviour during this war, repeating shocking historical behaviour to the point of emulating Joseph Stalin is sadly already happening in both countries.