Russia Says Ukraine Is Planning To Burst a Dam And Expands The Evacuation Zone In The Kherson Region. 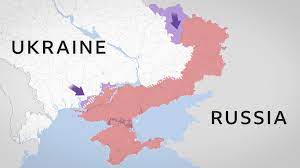 Reiterating claims that Kyiv had previously rejected, Russian-installed officials in Ukraine's southern Kherson region said on Monday that they were expanding an evacuation zone from the Dnipro river. They had previously suggested that Ukraine might be getting ready to attack the Kakhovka dam and flood the area.

Russia on Friday said it was extending an evacuation zone in Ukraine's Kherson region following a reported nuclear incident there.

"The borders of the zone have been changed according to existing data," Russia's Emergencies Ministry said in a statement, adding that this decision had been taken "in connection with an accident at one of its enterprises."

"We can't assess the scale or cause of this event, but we want to emphasize that it is absolutely secret and nobody knows about the consequences for people or the environment," deputy emergency minister Vladimir Puchkov later told Interfax news agency. "This is why we are carrying out our task looking at all possible measures. "To do this, we have decided to increase the size of the security zone around the area," he said.

Further, a local official said that a state of emergency had been declared in three districts.

After the incident, authorities closed a nuclear power plant in Ukraine's Kherson region and evacuated its workers. Local authorities declared a state of emergency in the Kherson region, as well as two adjacent districts — Dnipropetrovsk and Zaporozhye — on Friday morning, according to Emergencies Ministry representative Yekaterina Pochvogina. Pochvogina added that workers from the Chornobyl nuclear power plant were also evacuated.