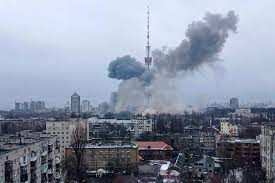 Kyiv, Ukraine- Russian missiles targeted Ukraine’s capital city of Kyiv on Sunday, June 26th, and struck a residential apartment building. According to the city’s Mayor, Volodymyr Bondarenko, one person died and at least six were injured.

The Ukrainian air force said that four to six long-range missiles were used in the attack, coming from Belarusian airspace. This is the first time in the ongoing war that missiles have come from Belarus.

This is the third time that this neighborhood has been targeted, as a missile strike hit it in May and in March. Advisor to the Minister of Foreign Affairs said on Ukrainian television that there are a “number of military infrastructure facilities located in the Shevchenkivskyi district of the Capital. This is why the Russians are shelling the district.”

Russia is slowly gaining more territory within Ukraine, and now controls almost the entire eastern region of Luhansk. Pavlo Kyrylenko, head of the Donetsk region’s military administration, said “We are now witnessing the accumulation of manpower, heavy armored vehicles and artillery in the direction of Sloviansk.”

Sloviansk is a town in the region of Donetsk and borders the eastern region of Luhansk. Sloviansk is near the Russian front and has been the target of Russian attacks for more than two months.

Additionally, on Saturday, June 25th, Russian President Vladimir Putin told the Belarusian President Alexander Lukashenko that Russia will transfer nuclear-capable missiles over to them. According to the Kremlin, Putin told Lukashenko that “In the next few months, we will transfer to Belarus the Iskander-M tactical missile systems, which, as you know, can use both ballistic and cruise missiles, both in conventional and nuclear versions.”

Then, a day later Kyiv was hit by missiles believed to have been launched from Belarusian airspace. It seems as if Belarus is going to become more involved in Russia’s war effort, and Putin has now provided nuclear weapons to the country.

As this was all occurring, the annual G7 summit began in Germany on Sunday. The G7 is a gathering of the world’s seven most advanced economies, which includes France, Canada, the United States, Germany, Japan, Italy, and the United Kingdom. These seven countries meet annually to discuss global security, climate, and economic concerns.

As you can imagine, one of the main talking points at this year's summit is the Russian invasion. On Sunday, U.S President Joe Biden announced that G7 countries will ban the import of Russian gold, tweeting “the United States has imposed unprecedented costs on Putin to deny him the revenue he needs to fund his war against Ukraine. Together, the G7 will announce that we will ban the import of Russian gold, a major export that rakes in tens of billions of dollars for Russia."

Gold is Russia’s second-largest export, behind energy. G7 countries are some of the largest consumers of Russian gold, so the ban will help decrease Russian funds for their war effort.

U.K Prime Minister Boris Johnson said that “the price of backing down, the price of allowing Putin to succeed, to hack off huge parts of Ukraine, to continue with his program of conquest, that price will be far, far higher. Everybody here understands that,” in an interview at the summit.

World leaders understand that punishing Russia in terms of banning Russian goods will come with an increase in price for their own citizens. We are already seeing that with oil in the U.S and Europe, and now gold and jewelry will likely increase in price.