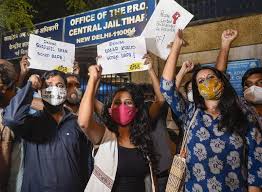 The Supreme Court of India on Friday highlighted the seriousness of the anti-terror laws bringing about pan-India implications. The judicature is thereby requesting statements from the three student activists who were provided with bail facilities by the Delhi High Court in the context of the northeast Delhi riots case.

The development came after a Delhi Court earlier ordered their immediate release, adding that the Delhi Police's claim that more time, was needed to verify the accused's and sureties' residences could not be a reasonable reason for their incarceration.

While considering the Solicitor General Tushar Mehta's contention, the supreme court stated the Delhi High Court had tossed the entire anti-terror law, UAPA, on its head by granting bail to these activists, said what was alarming was that the decision was 100 pages long and analyzed the entire law.

The disturbances, he alleged, were caused by the three accused coordinating with others while the US President was in town. 53 individuals were killed in the riots, many of whom were police officers. In addition, 700 people were injured.

The High Court made broad remarks and concluded that no offense, had been committed because the situation was under control.

It found that allegations under the Unlawful Activities Prevention Act (UAPA) against student leaders Asif Iqbal Tanha, Natasha Narwal, and Devangana Kalita had not been proven out prima facie in the Delhi riots conspiracy case. The accused were simply planning protests, according to the charge sheet.

The accused was not charged with any accusations relating to terrorist actions, according to the High Court.

According to the High Court, the right to demonstrate cannot be called a "terrorist act" under the UAPA,

The trial court's decision was revoked by the High Court, which denied freedom granted to the activists and permitted them to appeal by giving them customary bail on the condition that each of them must submit a personal bond of Rs 50,000 and two sureties for the same.

In response to the Delhi Police's appeal against the Court's decision to grant bail to three student activists in the Delhi riots plot case, the Supreme Court declared today that the impugned judgment should not be considered a precedent till the matter is properly resolved.

The vacation bench incorporating Justices Hemant Gupta and V Ramasubramanian declared that the bails accorded to the activists would not be altered or amended at the moment.

The fact that the High Court restricted the scope of UAPA in a bail application while the Act isn't challenged was "troubling" to the court.

The Bench intimated that until the appeal is settled, it might order that the verdict be issued without precedent. This order drew a comment from Mehta, who stated, "What relationship exists between the right to protest and the right to kill people? I'm reiterating my request to be allowed to stay."

A charge sheet was filed by the Delhi Police, against the rallies carried out by these three activists dating back to December 2019. The subject of the match was to protest against the Citizenship Amendment Act. The police claimed that these rallies were part of a 'bigger conspiracy' behind the communal disturbances in North East Delhi in February last year.

Till now, these three student leaders were obligated to spend their year in the premises of Tihar Jail despite the two lethal waves of the ongoing pandemic, which hit India hard. Their ineligibility for receiving temporary bail comes along with the fact that they were previously charged, under the UAPA {Unlawful Activities (Prevention) Act }.

Last month, when Natasha Narwal's father Mahavir Narwal succumbed to the coronavirus, the High Court granted her an interim release for three weeks. Meanwhile, the bailed student activists showed courage and gratitude for the public's and Pinjra Tod's support throughout their time in prison while welcoming the high court's order.