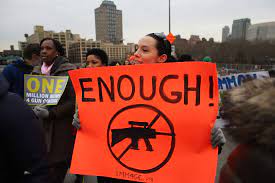 A bipartisan group of senators announced a proposal for gun control legislation on Sunday, less than three weeks after the mass shooting in Uvalde, Texas.

The proposal includes many steps to improve gun safety, such as providing funds for mental health resources and establishing more extensive licensing procedures. The actual legislation text is not yet written, but the announcement has the support of enough Republican senators to overcome the Senate filibuster.

The legislation would require anyone who sells firearms for profit to obtain a federal dealers’ license. Juvenile records would be examined for buyers under the age of 21 before they can purchase a weapon. Convicted domestic abusers would be barred from purchasing, and it would be a crime to buy a firearm for someone who does not meet the qualifications for owning one.

Money would be allocated to states that enact “red flag” laws, laws allowing law enforcement to temporarily remove firearms from people who pose a threat to themselves or others. Only 19 states currently have these laws. Funds would also go toward making mental health and counseling programs more accessible to students.

Sunday’s agreement still omits several sweeping steps that Democrats are pushing for, including banning assault-style weapons. These would include AR-15 rifles, the style of firearm used in the Texas shooting.

A New York Times story published June 4, eight days before the announcement, outlines key proposals considered by Congress and the difference they would have made in previous shootings. These provisions include banning large-capacity magazines used to upgrade guns and safer gun storage requirements, two other sweeping provisions omitted by Sunday’s proposal.

Since the Columbine shooting in 1999, 20 assailants have used large-capacity magazines, which gun control advocates seek to ban. According to the New York Times, ten assailants used a stolen rifle, which safer gun storage could also prevent.

By putting these steps in place, we can prevent the same types of shootings from occurring in the future. But the current proposal ignores many vital pieces of legislation that gun control advocates have discussed.

The announcement most likely responded to Saturday’s rallies across the country advocating for stricter gun control measures. People are pushing for change after the recent deadly shootings in Uvalde, Texas, and Buffalo, New York.