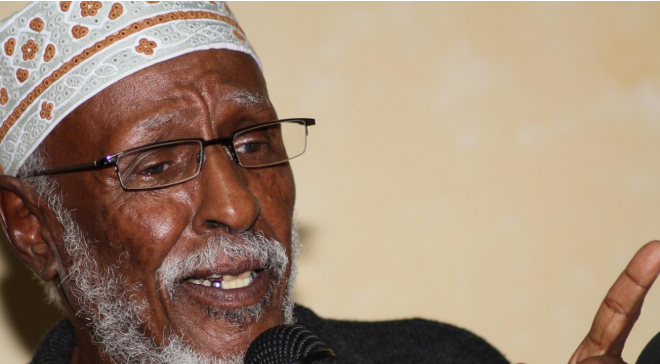 As Herbert and Hussein phrase it: “there is no way of knowing Somalis better than delving deep into their rich poetry”. Yesterday, Somalis lost a significant cultural figure, Mohamed Ibrahim Warsame, known as the poet Hadrawi, who died at the age of 79 in Hargeisa, Somaliland.

As the written Somali language was developed relatively late (1973), the oral national heritage is highly dominant in their culture. The government of Somaliland further specifies that as nomadic lifestyle has been an integral part of their societal structure, the importance of oral tradition is powerful.

Hadrawi was a highly praised man among Somalis, reports the BBC. Besides writing poems and composing songs, he also engaged in philosophy. The combination of these activities combined led him to fearlessly express the interests of his people. Consequently, he became an icon against oppression and authoritarianism imposed on his nation. Somalis across the world know his work.

“If the Eastern bloc had not abandoned us,

the West not lured us to perdition;

had we not become a weeping boil

to our neighbouring nations;

even the fabled white-winged crows

seeking a bolt-hole to avoid

our lost folk, scattered across the globe;

if it was not said to our wounded

and our injured, 'You deserve it!'

would I be so at one with you?”

This cited section from one of his pieces paints a vivid picture of his approach to his beloved Somali origin. Despite the fame that surrounded him, he was a “humble” man who did not live for pleasures of life, according to the BBC reporter who had the chance to personally meet him and to visit his house.

The Somali community, which has faced several challenges over the years and remains locked in battling the societal issues of developing states, cherish Hadrawi’s legacy and will do so even after he is long gone. Hadrawi gave voice to his nation which is extremely exposed to the impacts of climate change and third world exploitation. Through him the world can discover their situation and by understanding them can further engage in helping and providing aim. Hadrawi’s legacy will continue to impact people and communities across the country.