Somalia Suffers From War in Ukraine 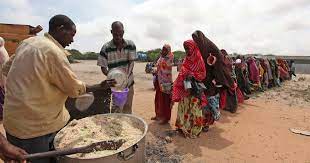 Somalia is on the brink of famine, but its aid funding has drastically decreased since the onset of war in Ukraine.

Last year, Somalia received more than double in aid compared to this year. Much of the decrease resulted from Western donors redistributing their dollars to the war in Europe.

Humanitarians launched an appeal that calls for $2.2 billion in assistance and protection for Ukraine. According to United Nations data, that appeal is almost 80% funded. But a much smaller appeal for Somalia is only 30% funded.

Conflict in Ukraine has weakened Western nations’ support for Somalis. But it has also affected the country’s access to food sources. Ukraine is one of the world’s top producers of grains, cooking oil, and fertilizer, providing most of Somalia’s wheat supply. However, Russia is blocking Ukraine’s export route through the Black Sea, causing the prices of those materials to soar.

Many Somalis can no longer afford the resources necessary to survive. As a result, more than 7.1 million Somalis, over half the population,  are now suffering from acute food insecurity. Nearly 250,000 of them are at risk of imminent starvation.

The cause of Somalia’s famine is a combination of the lack of funding, high food prices, and climate crises. In addition, the country is dealing with one of its worst droughts in decades. As a result, people are forced to vacate their homes for food, water, and assistance; often, none is found.

In April, the U.N. humanitarian agency reported that less than 30% of people arriving at camps in search of food and water were receiving assistance. The World Food Program recently shifted limited resources to focus only on the desperately hungry, halting aid to more than a quarter-million children suffering from acute hunger.

On June 28, The White House acknowledged the problem, stating that East-African nations will be most affected by Russia’s actions due to their reliance on Ukraine’s resources. Nimo Hassan, director of the Somalia NGO Consortium, stated that he believes donor countries understand the urgency but are prioritizing aid to the location of the conflict.