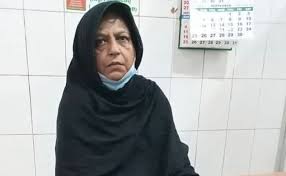 BJP leader and wife of retired IAS officer Maheshwar Patra, Seema Patra,  has now been suspended from BJP, after allegations that she kept her tribal help, Sunita, captive in her residence in Ranchi's posh Ashok Nagar area for 8 years. Seema Patra got charged after a video of the woman narrating her ordeal went viral on social media.

Jharkhand Police arrested Seema Patra on Wednesday and a case has been registered against her at Argora police station. Patra has been sent to police remand till September 12, says Public Prosecutor Pradeep Chaurasia. The suspended BJP leader is now claiming that she is innocent and termed the allegations as “politically motivated".

Sunita was reportedly saved by Ayushman, Seema Patra’s son who informed his friend, a government officer, about the torture and asked for help, reports claim. Acting on a tip-off from a government employee, Ranchi Police rescued the woman from Patra’s residence last week and recorded her statement on Tuesday before a magistrate.

Sunita has suffered dozens of injuries on her body as she was reportedly beaten with a hot pan, iron rods and was forced to lick urine off the floor over years of torture. Sunita, whose teeth were also broken with an iron rod, was unable to stand on her own when she was found as had been locked in a room without food or water.

Sunita is currently undergoing treatment at Rajendra Institute of Medical Sciences (RIMS) Ranchi. The arrest of the suspended BJP leader comes a day after Governor Ramesh Bais asked DGP Neeraj Sinha why no action has been taken against her yet.

Patra’s domestic help said on Wednesday that she has throat issues, adding that what everyone has heard is true and that “madam used to beat me up when I would make a mistake while working," Sunita said.

Meanwhile, BJP leader and former CM Babulal Marandi paid a visit to Sunita at the hospital and said, “We came here to meet the victim, she's a poor lady and used to work at Seema Patra's house. The way she was beaten by her was not right. It’s good that the accused has been arrested and the party has also suspended her."