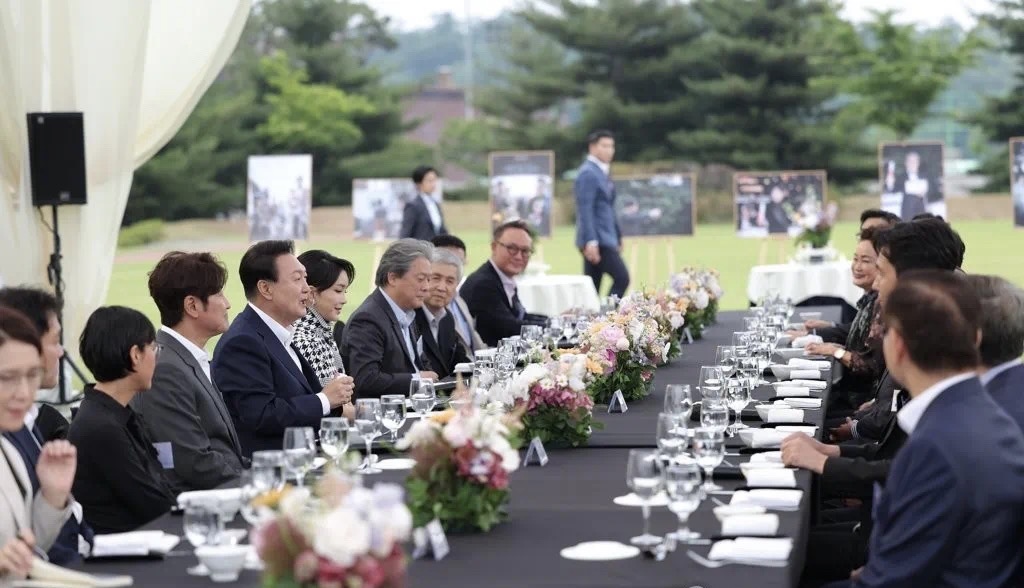 Seoul, June 13, 2022, the South Korean President, Yun Seok-yeol promised that the government would spare no effort to support South Korean films to take off again when he invited filmmakers to dinner on June 12.

On June 12, Yun invited film industry members to dinner at the presidential palace in Yongsan. The event was attended by the chairman of the Gangneung International Film Festival, Kim Dong-ho, directors Park Chan-wook and Im Kwon-taek, actors Song Kang-ho, Jung Yu-sung, and Park Hae-il, and representatives from ZIP CINEMA, the film distributor that produced the film Broker.

Yun said at the banquet: "Nowadays, Korean films are excelling in the international market in terms of both artistry and mass appeal. This is our national character and a potential force for development. The main thrust of our cultural and artistic policy is 'to give support but not to interfere'. If people need any help, we will listen carefully to the words of those who are running around on the film set, and we will try to actively help whenever people need help to promote the development of the film industry."

Yun also mentioned, "Several filmmakers here have achieved a far-reaching feat at Cannes this time, so I think it's appropriate to entertain everyone on behalf of the nation. We will do our best to help promote the Korean film industry in the future."

Earlier, Yun and his wife Kim Kin-hee also watched the movie Broker together at a cinema in Seoul.

To Director Park Chan-wook: "I salute the hard work of Director Park Chan-wook and the cast and crew who have reaffirmed for me the inherent originality and outstanding competitiveness of Korean cinema. I hope that you will continue to work to create works that will be loved by people around the world and raise the status of Korean cinema in the world."

To actor Song Kang-ho: "The outstanding performance of actor Song Kang-ho, who has made his mark in the history of cinema, has once again raised the confidence of the Korean people in culture and art, and has given great comfort to the people who were discouraged by the epidemic. I salute the hard work of director Hirokazu Kore-eda, the cast and crew who created such a handsome production as Borker. I hope you will all continue to work to create works that will be loved by the people of the world, and I look forward to more active activities from all of you."

Former South Korean President Mun Jae-in, who was instrumental in the global success of Korean film and television productions such as Parasite and Squid Game during his term in office, also invited the Parasite creative team to a dinner at Cheongwadae. During the dinner, Mun said, "The government will always stand by our filmmakers and ensure that that all filmmakers can use their imagination and create their works freely without any worries."