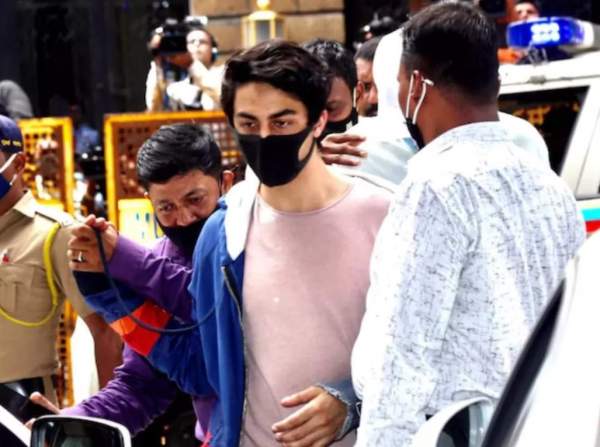 Mumbai: Shah Rukh Khan’s son, who was arrested by the Narcotics Control Bureau (NCB) on October 3, was finally released on October 28 after being granted bail. Since October 8, the 23-year-old had been detained in Arthur Road jail, Mumbai.

Aryan Khan, the elder son of Shah Rukh Khan and Gauri Khan, has been granted bail by The Bombay High Court on Thursday, October 28. The 23-year-old was detained by the Narcotics Control Bureau (NCB) on October 3 after a raid on a rave party on the Cordelia Cruises' Empress Ship in Mumbai. After the incursion on October 2nd, Aryan Khan has been in NCB custody. On October 8, he was brought to Arthur Road Jail in Mumbai. After being under NCB judicial custody for 5 days, imprisoned for 20 days in Arthur Road Jail, and getting his bail rejected twice, he was finally granted bail on October 28.

SRK's manager Pooja Dadlani and his legal team have been captured on camera and, the pictures are out on social media. The superstar appears to be comforted after so long. SRK’s legal team stated that “Aryan Khan has ultimately been released on bail by the High Court. No possession, no evidence, no consumption, no conspiracy, right from the first moment when he was imprisoned on October 2, 2021. Nor is there anything as of now. We are grateful to the Almighty, that our prayers were accepted by Mr. Justice Nitin Sambre and he granted bail to Aryan. Satya Meva Jayate.”

It is ultimately a sigh of relief for SRK and Gauri, as they had been doing everything they could to get their son home. Not just Aryan Khan, his friend Arbaaz Merchant and Munmum Dhamecha, who was also accused of alleged involvement in the drug issue, has been granted bail. However, the bail order would be released tomorrow, after which the three shall be released from the jail said Senior lawyer Satish Maneshinde. Mukul Rohatgi, Aryan’s lawyer also affirms that all three will be released from custody on Friday or Saturday. The Bombay High Court has not yet decided on the case, and arguments are still ongoing, although the court granted bail to three of the accused.

Aryan Khan was arrested under four sections of the Narcotic Drugs and Psychotropic Substances Act: Sections 8(c), 20(b), 27, and 35. In addition to Aryan Khan, the NCB detained his friend Arbaaz Merchantt and another suspect, Munmun Dhamecha, for their alleged involvement in the Mumbai cruise drugs case.

"No drugs were found on Munmun. I don't know why she was being tortured in the case and her image was tarnished," said Dhamecha’s lawyer, as she was given bail today.

The Bollywood celebrities were overjoyed when they learned that the young man had been granted bail. Along with R Madhavan, Filmmaker Rahul Dholakia, Sudhir Mishra, many more people shared their happiness through tweets.