'Standing For Women’ Protest in Bristol 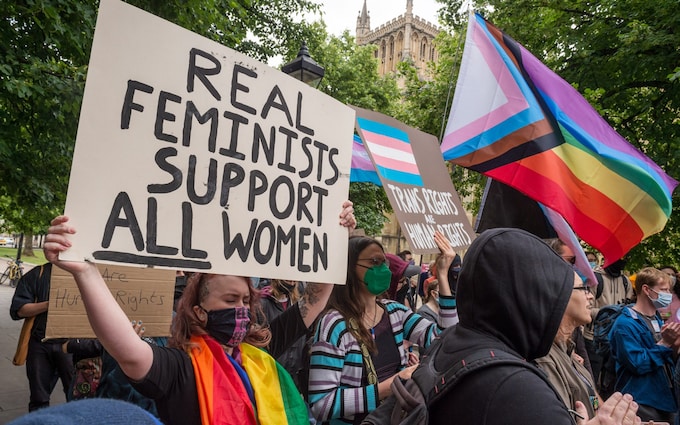 On Sunday 19th June, two separate rallies took place at College Green, Bristol. A group called ‘Standing for Women’, whose rally started at 1pm, and a counter protest for trans rights at 12pm. ‘Standing for women’ are a group of trans exclusionary radical ‘feminists’ who claim to speak on behalf of women’s rights.

‘Standing for women’ are well-known for their extremist views on what would be insulting to call ‘feminism.’ On Facebook the group have reposted, in acknowledgement, chalked slogans that read ‘Terfs are fascists’ as though to mock those who have angrily written such messages. Other posts from their event in Bristol this Sunday include videos berating trans activists and those who disagreed with speakers such as Kellie Jay Keen, their founder.

In a video reposted by ‘Standing for Women’, Kellie Jay Keen can be heard shouting hate speech such as ‘trans women are men’ and ‘there is no such thing as trans’ at protestors. It is unfortunate that women who invalidate and erase the trans experience wrongly feel that trans women threaten the existence of other women. Inclusion of trans women does not mean that anyone is then excluded by their acceptance.

Following Sunday’s protest, Kellie Jay Keen posted on her youtube channel to debrief in a video titled ‘Let’s talk about Bristol.’ She delighted in her reminiscence of trans activists who stood their ground against hateful women such as herself, or as she carelessly branded them with a cruel smirk, ‘the men in dresses’ and ‘dirty little perverts.’

What Kellie Jay Keen fails to consider is the trans community who, after such hateful language, are put in danger by cisgender women who abuse their power to hold a microphone and speak to others.

Their website states that ‘We do not use "preferred pronouns" or language that disguises the threat to women and the safety of children.’ Although ‘the safety of children’ is an apparent concern for ‘Standing for women’, this concern does not extend to the safety of trans children. Kellie Jay Keen has spoken several times about her opinion on the legal age of gender reassignment surgery, and this is fair. What is unfair is the erasure of trans identities and calling said surgery mutilation or abusive to children.

On Sunday evening Bristol Police issued a statement in regards to the two protests. The police took a neutral stance as they reminded the public that ‘the right to protest is a fundamental democratic right.’ The police claim that no violence was witnessed and that both parties ‘raised their voices.’ Thankfully, Bristol is a brilliantly inclusive city that celebrates and respects the trans community.