Student Load Debt Forgiveness: Is Biden on the same page as Americans? 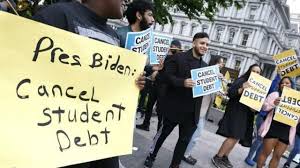 During President Joe Biden’s campaign, he promised to deal with student loan debt. Despite pressure from Democrats to cancel $50,000 per borrower, Biden has announced plans to address student loans on a smaller scale.

In April, Biden said he was considering debt reduction, but not the $50,000 reduction that the Democrats were hoping for. The final decision is expected to come before the end of August.

During his campaign, Biden also proposed forgiveness solely for borrowers who earn less than $125,000. However, NPR found that support does not change with the incorporation of an income ceiling. For example, 52% of Americans support forgiving $10,000 for borrowers who earn less than $150,000, compared to the 55% supporting a universal $10,000 cancellation.

The poll also shows that 82% prefer lowering the cost of tuition to student loan forgiveness. An overwhelming majority of Americans want Biden to prioritize the overall cost of attending a university, which he has yet to address.

So far, the Biden administration has authorized the cancellation of $25 billion in student loans for roughly 1.3 million people, which is more than any other administration. Most cancelations have been directed toward disabled borrowers and those who colleges have defrauded.

But universities do not need Biden’s approval to cancel student loans on their own accord; multiple schools have taken it upon themselves to do this. For example, on Monday, Dartmouth College announced that it will be removing all loans from its undergraduate financial aid awards.

Harvard University, Yale University, Brown University, Columbia University, and the University of Pennsylvania have adopted no-loan policies. But students taking out loans at the millions of schools still requiring they do so are hoping the Biden administration relieves them.