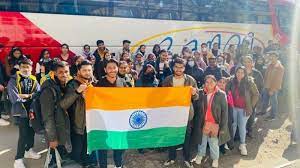 The first special flight comprising students and other Indian nationals from Ukraine will reach Mumbai by 9pm today. The AI1944 flight that took of from Bucharest Airport in Romania will bring home 219 Indians who were stranded in the war zone. After the Russian military invasion began in Ukraine on 24th the country went under an emergency situation and the airspace of Ukraine was closed. This left several Indians isolated in the foreign country without a way back home.

An approximation of 18,000 Indian students are pursuing their higher education in Ukraine, chiefly in the medical field. The stranded people shared their experiences of war through social media where many expressed panic that they were hearing gunshots and explosions around their areas of residence. Many are left without an adequate supply of food and water and are staying under cover in bunkers and metro stations. There are several students from Rajasthan, Kerala, Uttar Pradeshand, Karnataka and other states, who are waiting for aid from the government and the embassy.

The first set of people, including 470 students were evacuated by the Indian embassy from Eastern Ukraine to a neighbouring country on Friday. People crossed the borders in vehicles displaying the Indian Flag and some even walked kilometres by foot to the Poland border. The Foreign minister S. Jaishankar had held discussions with his Ukrainian counterpart Dmytro Kubela on Friday evening regarding theevacuation of Indian nationals. The government, with the cooperation of Romania,Poland and Hungary decided to evacuate citizens by special flights. The airspace of these countries are open and would facilitate a safe flight back to India. The government said that it will ensure the safety of the citizens and would take over the entire expenses of this evacuation operation.

On the increasing war tensions, the Indian government had already informed the citizens living in Ukraine to ensure their safety and to leave the country if necessary last week. But several people were not able to return as the neighbourhoods seemed safe earlier and also due to educational restraints. Students also complain that the universities asked them not to go back and also the air-fare was too high on those days leading to conflict for them to afford.

The second flight of Indian Nationals will take off from Budapest in Hungary and will reach Delhi by the early hours of Sunday.