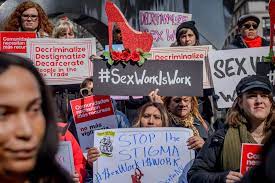 Article-21 states equality for every person belonging to any background, says Supreme Court

Supreme Court recognised sex work as a ‘Profession’ with utmost dignity and respect given to the workers. The decision was headed by Justice Nageswara Rao and two other judges of the Supreme Court on Wednesday.

The court remarked that the workers who are doing their work with their consent can’t be harassed and molested even by the police personnel. Children of the sex workers should not be separated by the police if found in a whorehouse. If any child is found in the brothel it will not be concluded that the child has been trafficked.

The court also stated that “Sex workers are also human beings as we all are, they should also get equality as it comes under Article 21 of the Constitution of India”. Adding to it, the court also briefed that if a sex worker is lodging a complaint against any kind of crime or molestation, the police needs to investigate properly without any discrimination against her.

The Supreme Court also advised the media not to disclose the identities of the sex workers in any form of their media platforms while having a raid or if the sex worker is a victim or an accused. Court has recommended to provide immediate medico-legal care to the victims of sexual assault as while being the sex workers they face brutal harassment.

Many times it has been observed that sex workers are not treated well because of which the molestation and harassment of them and their kids also increases. The Supreme Court had asked the Central government for their retaliation which the government will give their feedback on 27 July.

After legalising and giving equality to the sex workers it will now be more intriguing to inspect the ground situation of sex workers in and outside their brothel.