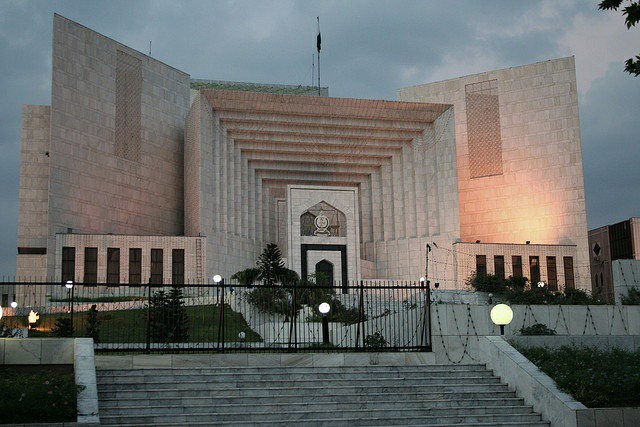 On Tuesday, the Supreme Court of Pakistan rejected the petition of full court hearing on the case filed by PML-Q against the decision of Punjab Assembly Deputy Speaker Dost Muhammad Mazari on discarding 10 votes of PML-Q in the Punjab CM's election. According to sources, PML-Q's request was heard by the three-member bench including the Chief justice of Pakistan Umar Ata Bandial, Justice Munib Akhter and Justice Ahsan.

As stated by the Chief Justice of Pakistan, the ruling coalition failed to provide sufficient legal justifications as the arguments were based on the party head's directions, due to which this request to set up a full court bench was denied.

He further regarded this plea as an attempt to postpone court hearings: the judges are not available up until the second week of September. He also added that the court will hear the arguments based on the merits of the case and that they are concerned with wrapping up this case as quickly as possible.

Moreover, Mazari's lawyer Irfan Qadir informed the Supreme Court that their client has refused to be part of further case proceedings. Instead, they will file a petition to review the court's ruling on not providing a full court bench.

Commenting on today's decision, PTI leader Fawad Chaudry while having a conversation with media, said that the Supreme Court should not be politically burdened. He also stated that PML-N should have accepted the defeat and segregate itself from Punjab CM elections.

Earlier today, Maulana Fazlur Rehman, the President of Pakistan Democratic Movement (PDM) said that following today's rejection of their plea, they would not be part of the petition filed against the ruling of Deputy speaker Punjab. Therefore, they will boycott the hearing process.

Likewise, the Chairman of Pakistan People's Party (PPP), Bilawal Bhutto asserted that it would be better if the full court is present when one institution is making decisions about another institution. Besides, he also said that three people cannot decide fate of the country and nationals will accept the decision of only the full court.

Maryam Nawaz, the Vice President of PML-N regarded the three people bench as anti PML-N which has been established for one-sided decisions. In her tweet, she wrote that the only reason for which the Supreme Court denied the decision of full court was the “Fear of contradiction of its own decision”. She also added, “When the decisions aren’t taken in accordance with the Constitution Law and justice, then the formation of a full court is considered dangerous”

4 months, 1 week ago by [email protected]

This pronouncement will further increase the political divide and widen the gap between Judiciary, parliament and establishment. The already fragile economy will be pressed further.