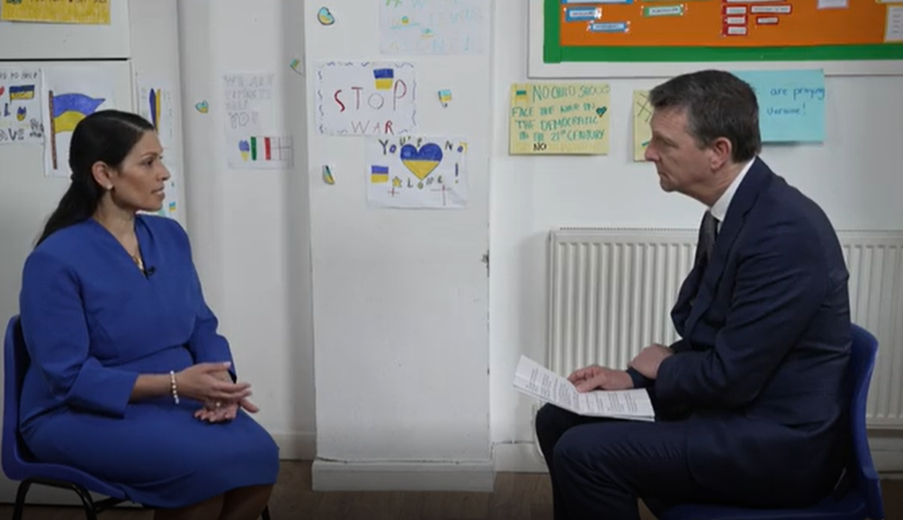 Ever since the invasion of Ukraine back in February, the world has vouched to do its part and help Ukraine. The cabinet of the Secretary of the UK put in the idea of a ‘Housing scheme’ for the Ukrainian refugees, but that plan has seen more and more delays in the section where visas are required. But how is this making it exceedingly difficult for the Ukrainian refugees to get visas if already civilians are getting them, such as on 21st March 2022 only 4,000 applied successfully for the visas?

“Delays and more frustration can only be dealt with a simple apology”:

Since then, Priti Patel has voiced how she is utterly not very happy with how Uk is dealing with the scheme, as it’s not helping the Ukrainian refugees, only making it worse minute by minute. Just like any new scheme takes time to develop and be successful, there is still hope that this scheme will be just as successful as the schemes before it. Yet, apart from her frustration, she has apologized along with the refugee minister for the consistent and unexpected delay in this scheme.

The fact that this or any scheme takes time, proves to both the Uk citizens and the Ukrainian citizens that they will expect more delays in this scheme. The main question that keeps arising from the prolonged delays in this scheme is why the UK does nothing about the refugees coming to Uk by boat, but through this ‘Housing Scheme’ millions of Ukrainians are seeing three-four weeks of delays. According to BBC’s Mark Easton, the Uk is very slow in this ‘Housing scheme crisis, as still millions of Ukrainians are stranded in their homeland that has turned into a war zone.

“Changes to minor parts of the scheme only hope to speed up the visas application”:

The possible changes in this could be the possible reason for the decrease in the rate of the Ukrainian refugees that apply to this scheme and the rate at which the visas are issued. In another speech that Ms. Patel did in the House of Commons on 28th February 2022, the Ukrainian refugees will be continuing to get the security and biometric checks which make it easier to get visas in every country, as this part has been evident in every scheme such as when evacuating the civilians out of Afghanistan and has said to have worked there, so will work here.

In this way, both the UK civilians will be kept safe at all costs and the Ukrainian refugees can easily leave, especially by preventing any frauds such as the Russian troops blending into the Ukrainian environment, whether it be the civilians or the Ukrainian forces. This will then make it easy to further stop Russia and other extremist groups that are a constant danger to both the Ukrainians and Uk. Security is very significant to the Uk if it wants to ensure that they are handling this Ukraine matter with extensive care, as they already worry about the high costs of the oil at $100 per barrel.

Ms. Patel also pointed out how the Salisbury attack along with the nerve again used on the surfaces of Ukraine proves how Putin is planning something far more dangerous, and the security checks are the only possible and strongest way to prevent Putin from succeeding in whatever he plans and to ensure a safe journey of the Ukrainian refugees arriving in the UK.