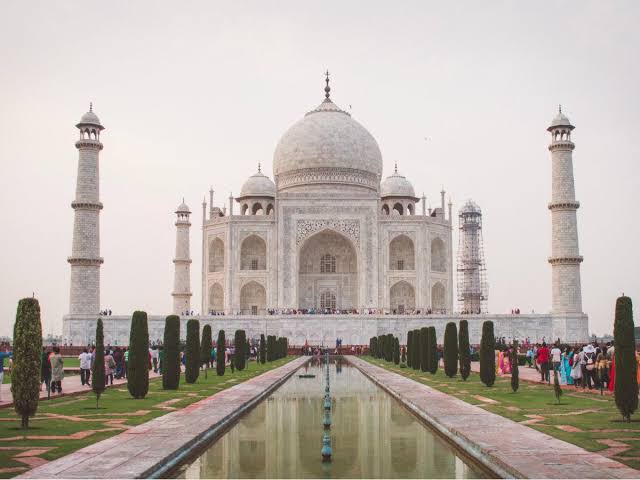 One of the eight wonders of the world, the Taj Mahal, Agra would be under mud pack treatment. The main dome will have a mud pack over it to regain its white pearl shine. For the next six months, its dome would be covered with thick layers and remain under scaffoldings. The mud pack treatment was applied earlier, but it was only for the four small minarets. It is the first time to be applied to the main dome.

What is mud pack treatment?

Mud pack is a natural product that consists of a mixture of mineral or mineral-medicinal water (including seawater or saltwater from lakes) with organic or inorganic material produced from the biological and geological process used as a therapeutic treatment in the form of a mud wrap or bath. It is the same pack used by humans to make their faces glow and to remove impurities. It is somewhat lime-rich clay.

What is the need for a mud pack treatment?

In the past few years, we have seen a change in the colour of the marble of the Taj mahal. The reason behind it is an increasing level of pollution. Pollutants in the air have led to the discolouration of the Taj Mahal. The colour has changed from sheen white to Yellow, and now it is getting brownish and greenish. Particles in the air consisting of black carbon and dust have given a brown tint to the Taj mahal. These particles are released through the burning of waste and residues, automobile fuels, and the air released from the chimneys of factories. So, as we use a face pack to remove the dirt from our face, similarly, a mud pack will work the same for the taj mahal.

How is it going to be applied?

Hundreds of workers will have to reach the main dome to apply the pack. Iron scaffoldings will be there all around. A technical team and a group of engineers will be there to guide, as stated by an official. The pack will be applied to the dome 2 to 3 times to make a thick coat. The coat would be applied to the area that needs to be cleaned and left to dry for 3-4 days. This thick coat of lime-rich clay will absorb all the impurities and dirt from the surface including the spots of bird waste. When it dries, the workers will remove the dried flakes. Then it will be washed with water and in the end with distilled water to clean the left impurities. As explained by an Archaeologist from ASI (Archaeological Survey of India), "The work will start after the monsoon season is over as rain can decrease the effect of the pack, and also it will be difficult for the workers to apply the pack in the rain."

This treatment was used for the first time in 1994. Due to the effect of pollution on Taj mahal came into notice in the 1990s. After that, this mud treatment was used in 2001 and 2008 for the same reason and again in 2014. The reason has always been the same, increasing pollution. Recently in 2019, the four minarets with some parts inside were given mud treatment to remove the stains. Last year, when US President Donald Trump visited the Taj Mahal, the grave facsimiles of Shahjahan and Mumtaz were given the same mud treatment.

Covid-19’s impact on the treatment

Looking at the present situation, the pandemic is the right time to apply the treatment as the number of tourists has decreased. As said by the president of the Tourists Guide Association, Shamsuddin Khan, "International flights are closed for tourism, and it is the right time to treat the main dome as there will be very few international tourists. This is one of the good impacts of a pandemic, but there is also a bad impact i.e., the availability of labourers and even office workers are less. This availability of workforce is dependent on the situation. The workers might be less due to covid.