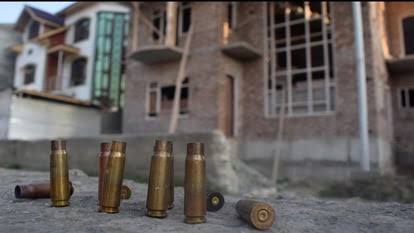 Recently, there has been a rise in terroristic activities in Kashmir. The terrorist group, known on social media as Kashmir Freedom Fighters (KFF) are responsible for the said events. Two people died in targeted killings by this group. This group admitted to these killings on their social media handles by uploading related posts.

Both of the targeted people belong to different regions. One of them was working as a bank manager and another one was a labourer in a brick kiln. These killings happened separately in Kashmir on Thursday.

Vijay Kumar was from Rajasthan’s Bhagwan village working as a bank manager at the Ellaquai Dehati Bank (EDB). Vijay was on duty in the morning when three shots were fired at him by a pistol-borne militant in the Arreh-Mohanpora branch of Kulgam. CCTV cameras of the bank recorded this incident. The police confirmed that during the incident Vijay was injured and he was immediately transferred to the hospital. However due to the injuries sustained, hwe was declared dead. Vijay was a newly-wed, living with his wife in the Qazigund area.

Even though the Kashmir Freedom fighter group have taken responsibility still the police haven't confirmed about the claim. KFF released a statement that Vijay Kumar was holding a domicile and was eliminated by their cadre. They somehow put a warning in public through that social media post, saying that anyone who tries to get involved in any demographic change in the valley will meet the same fate.

In a different incident, another targeted killing happened in the evening, random firing was done by the terrorist in the Chadoora area of Budgam on two non-local labourers. These labourers were working in a brick kiln. Both of them were shifted to the hospital but one of them couldn’t be treated and was declared dead. The victim was a man named Dilkhush from Bihar.

A total of nine killings have been recorded in the last 22 days in Kashmir. It was identified that the murderer of Vijay had also killed Rahul Bhatt. Rahul Bhatt was a Kashmiri pandit. He was also shot during his duty timings on the 12th of May, in Budgam. There are other incidents also like this happening since last 22 days.