The Cauvery Calling movement and its second year. 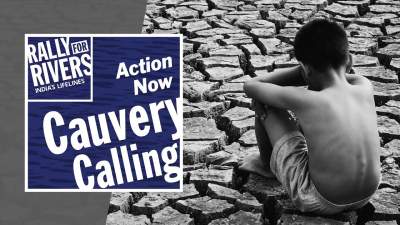 While the world fights extensively towards the adverse effects of climate change, the Cauvery Calling initiative on Tuesday started its second-year program, aiming at reaching out to the farmers of the Cauvery districts in Karnataka. With a successful year in 2020, the Cauvery Calling initiative was founded by the spiritual leader, Sadhguru Jaggi Vasudev, planted around 1.1cr trees around the Kaveri river catchment area in Karnataka and Tamil Nadu. In a meeting held with the Rally of Rivers Board and the Cauvery Calling Board in Bangalore, a decision was made to plant 35 million seedlings and raise awareness among the farmers to inculcate tree-based farming. The revival of the river Cauvery to its glory is of significant help to the farmers who depend on it for their bread and butter.

What is the Cauvery Calling initiative?

In September 2019, Sadhguru undertook a journey to revitalize the Cauvery river and its basin and thus helping 84 million people whose lives depended on it. The mission was a branch of the successful 2017 campaign Rally for Rivers across India to save the rivers at the brink of depletion. The focus then shifted to river Cauvery which had depleted over 40% over 70 years. The mission also aimed at educating farmers in the region to undertake sustainable farming and agroforestry.  With a vision to plant over 242 crore trees, the Cauvery Calling mission received massive support from across the world.

The program was further boosted by Sadhguru who led a two-week bike rally along with many other celebrities from the source of the Cauvery, Talakaveri in Kodagu district Karnataka to Thiruvarur in Tamil Nadu. The rally also involved many events covered in major cities as well as small villages covering the purpose of the mission.

Fueled by the forests, River Cauvery used to flow in full force throughout the year during the mid-1990s. But due to extreme deforestation and urban development, the river now runs dry during the summer causing major water scarcity in the states of Karnataka and Tamil Nadu. In 1998, a report by U.N. experts predicted that 60% of Tamil Nadu would turn into a desert by 2025 which is just four years from now. Realizing the gravity of the situation, Sadhguru kicked off the Cauvery Calling initiative to revive the river and replenish the soil and promote water retention by planting trees around one-third of the river basin. With a plea to donate 42 Rs per tree, the program outreached worldwide and collected Rs 10,626 crores as a donation which is now being inspected by the Karnataka Government.

In its second-year mission post the COVID situation, the Cauvery Calling program is undertaking a massive job to cover about 1,785-gram panchayats in 57 taluks in the nine Cauvery districts with over 24 lakh farmers. Over 8 weeks, around 1800 events will emphasize and educate the farmers on the benefits of the tree-based farming model and the agroforestry schemes available. Another unique feature of the initiative is to appoint 890 ‘Mara Mitras’ (Friend of Trees) at every gram panchayat to aid the demands and needs of the farmers at their doorstep.

Sadhguru stated that “If we are successful in implementing this, it is not just Cauvery alone, but this will be a game-changer for India and the whole tropical world. Any tropical country in the world is dependent on rain for the water." Furthermore, he said, “The idea of Cauvery Calling is to create a demonstrable model and make it a living example for the entire world to adopt and replicate in their context."

The Timeless Conflict of the Cauvery.