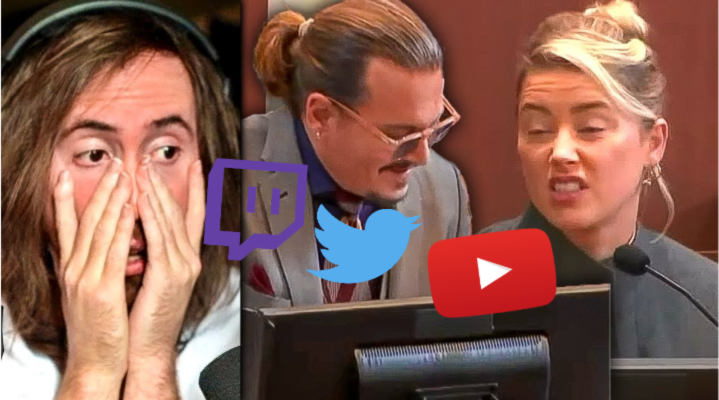 The ongoing trial between actor Johnny Depp and ex-wife Amber Heard has sent waves through the public. In recent weeks, the prosecution has blown up across various forms of social media, especially on Twitter and Twitch platforms. Some of the most popular streamers on Twitch, such as xQc and Asmongold, stream the trial daily to hundreds of thousands of viewers.

Viewers eagerly tune in each week to see the daily happenings of the trial, constantly spreading their opinions throughout social media. For weeks, hashtags such as “#AmberHeardIsALiar” and “#JusticeForJohnnyDepp” have been trending on Twitter. In addition, memes involving Amber Heard supposedly ‘acting’ on the stand have continued to spread.

The consensus is clear: most people on social media don’t trust Amber Heard.

While the public perception of the trial does not affect the legal system, in this case, it’s arguably more important than the final verdict. Heard’s team might agree, seeing as the Aquaman actress fired her PR team two weeks ago. The actress fights an uphill battle with the public, her supporters being greatly outnumbered by Depp’s.

The professional career of Johnny Depp spans decades. The actor initially appeared in many small roles in films and shows such as 21 Jump Street and A Nightmare on Elm Street. However, Depp’s career exploded in popularity after his genre-defining role as Captain Jack Sparrow in the Pirates of the Caribbean franchise. As a result, the actor gained millions of dedicated fans who have grown up watching and enjoying his work.

Heard’s experience, on the other hand, hasn’t gained her a comparable following. Mainly appearing in minor/supporting roles in films like Friday Night Lights and Pineapple Express, the actress didn’t have a comparably large role to Depp until being cast as Mera in the blockbuster film Justice League. Of course, all of this is to argue that Heard has been at a public disadvantage against her ex-husband.

That’s not to say, however, that Heard doesn’t have a social media bias potentially working in her favor. Since releasing her 2016 op-ed, Heard has had the support of the popular “#MeToo” movement. Initially starting in 2006, the MeToo movement gained popularity around 2016-2017 after the Harvey Weinstein sexual assault allegations.

According to an article published by The Harvard Gazette, “sexual-abuse accusations against film mogul Harvey Weinstein triggered a tsunami of harassment and abuse allegations leveled at men from every corner of American society.” This movement took the country by storm, touching not just the film industry but nearly every other industry in some way. Followers of the movement vehemently support a woman’s allegations on social media and attack those who claim as victims of abuse.

Therefore, when Amber Heard released her op-ed article in 2016 claiming abuse from her ex-husband Johnny Depp, she had an entire social media movement behind her (and still does). However, that movement is vastly outnumbered by the countless streamers and online personalities (such as the previously mentioned Twitch streamer Asmongold) that have been vocally supporting Depp throughout this trial.

Regardless, the trial continues this week, with Heard expected to begin cross-examination from Depp’s team. The final verdict of the trial is unclear, but in the case of these two actors, their public perception after this matters most.