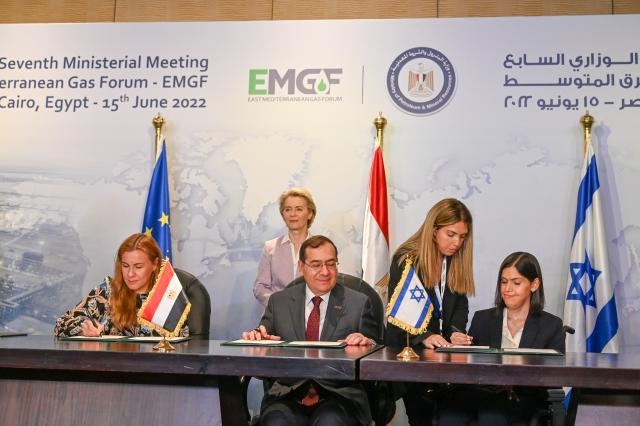 The trilateral memorandum of understanding was signed in Cairo. Source: https://audiovisual.ec.europa.eu/en/photo/P-058332~2F00-01

At a meeting in Cairo on June 15th, the European Union signed a memorandum of understanding with Egypt and Israel. The new agreement is in line with the path recently undertaken by the EU to diversify its gas provisions and reduce reliance on Russian gas. The President of the European Commission, Ursula von der Leyen, was also present at the meeting and met with Egyptian President El Sisi. She stressed the importance of cooperation with the eastern Mediterranean states by emphasising the clean energy transition and the fight against climate change. This can be achieved by focusing more on the opportunities that full EU-Egypt cooperation can offer. She also stressed the importance of this country in the EU's attempt to shift away from Russian fossil fuels. This new agreement is also in line with the new EU programme REPowerEU, launched in May this year. This plan aims to gradually reduce Europe's dependence on Russian fossil fuels and boost the green transition toward renewable resources.

The new memorandum of understanding was signed during the East Mediterranean regional energy conference between the European Commissioner for Energy, Kadri Simson, Minister El Molla, and Minister Elharrar for the export of natural gas to Europe. The three parties will collaborate on ensuring steady natural gas delivery in a manner compatible with long-term decarbonization goals and based on market-based pricing. Natural gas will be supplied to Europe via Egypt's LNG export infrastructure from Israel, Egypt, and other Eastern Mediterranean sources. The deal is a historical landmark for both Israel and the EU as it will allow the former to export significant amounts of gas to Europe for the first time, according to the Israeli energy ministry.

The basis for this agreement was laid two days before, June 13th, when the European Commission President, Ursula von der Leyen, along with the Italian Prime Minister, Mario Draghi, met in Israel. Both leaders began energy talks with Tel Aviv, which, thanks to big offshore discoveries, has transitioned from a natural gas importer to an exporter in recent years. During this visit, von der Leyen met with Foreign Minister Yair Lapid, who stated that Israel's connections with the EU are a strategic resource, and with Energy Minister Karine Elharrar, where the EU's need for Israeli gas was reiterated. On Tuesday, she also met with Prime Minister Naftali Bennett. The meeting focused mainly on energy cooperation.

According to the memorandum, Israeli gas will be transported to Egypt's LNG terminal on the Mediterranean through a pipeline. Part of the gas will be liquified and transported to Europe by tankers. This new deal raised anew the problem of the lack of a pipeline connecting Israel to Europe directly. The EU has taken steps in this direction in January 2022 by setting aside 657 million euros for the construction of a 2,000-megawatt underwater electrical line that will connect the power grids of Israel, Cyprus, and Greece. These new plans will replace the previous discussions between the three countries concerning the EastMed project, a pipeline that would connect Israel to Europe through Cyprus and Greece.

The pipeline was suggested after the discovery of new gas reserves in Israel. Nevertheless, feasibility issues due to logistical complications and environmental impact hampered the trilateral project. The European Commission insists on the EastMed pipeline's commercial viability before approving it and on how the project can contribute to EU Green Deal targets. Accordingly, before investments can be made, the project has received grants from the Connecting Europe Facility (CEF) to conduct all essential technical studies, including seabed surveys and engineering studies.

In the meantime, other export options are being considered. One of these is cooperation with Turkey. After more than a decade of diplomatic animosity, Tel Aviv’s ties with Ankara have warmed, with experts claiming that Turkey's desire for collaborative energy projects is partially to blame for its approach to Israel. On March 9th, a meeting between Israeli President Isaac Herzog and Turkish President Recep Tayyip Erdogan took place in Ankara. Both presidents expressed a desire to rekindle bilateral relations based on shared interests, among others, energy cooperation. This includes the construction of an underwater gas pipeline between Israel’s Leviathan field and Turkey. According to Israel's former energy minister, Yuval Steinitz, the pipeline project would cost $1.5 billion and take two to three years to construct. The main problem to be addressed, though, is the longstanding Cyprus issue, since the new pipeline would pass through the Cyprus seabed. Mithat Rende, a former Turkish ambassador to Qatar and the OECD and now head of the Turkish Foreign Ministry's energy desk, said that the division of Cyprus and the need to route a pipeline through Cyprus' EEZ should not prevent a project to transport Israeli gas to Turkey from moving forward. In this regard, a commercial agreement established by lawyers and backed by international arbitration assurances may help to build confidence between the parties.

The EU’s rush towards new energy resources came after the decision to continue importing Russian gas as a temporary measure. The EU will continue to allow 800,000 bpd of oil imports via pipeline given that countries such as Hungary and Slovakia rely on it. Other countries, like Germany and Poland, which both import Russian oil via pipeline, have stated that they will stop doing so by the end of the year. As Ursula von der Leyen remarked, after all the new measures are implemented, the EU will let Russia export only 10 or 11% of the oil it previously sold to EU countries.