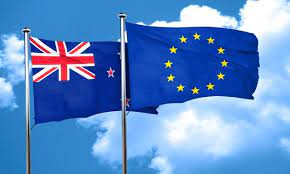 On June 30th, the President of the European Commission, Ursula von der Leyen, and the Prime Minister of New Zealand, Jacinda Ardern, signed a trade deal in Brussels.

The new agreement is expected to provide considerable economic prospects for businesses and consumers on both sides. The agreement also contains remarkable sustainability requirements, such as adherence to the Paris Climate Agreement and fundamental labor rights, which can be assured only through trade sanctions, should these rights be violated.

This deal aims to boost bilateral commerce. This is anticipated to increase by up to 30%, with a potential increase in EU exports of up to €4.5 billion annually. The amount of EU investment in New Zealand might increase by as much as 80%. Moreover, the deal will reduce taxes for EU enterprises by almost €140 million annually.

The Executive Vice-President and Commissioner for Trade, Valdis Dombrovskis, stressed the relevance of this agreement. He said that “this is a new generation of trade deals, with both sides set to make real economic and environmental gains. New economic opportunities are vital as we strive to recover from the twin shocks of COVID-19 and Russia's aggression against Ukraine”.

The deal was the result of multiple negotiations that started in 2018. Aside from adhering to the Paris Agreement and core labor rights, the agreement will create economic opportunities for a variety of businesses, farmers, and buyers. Moreover, this will strengthen the EU-New Zealand relations, with positive economic repercussions in the wider Indo-Pacific region.

As soon as the deal enters into force, EU farmers will have far better prospects of selling their produce in New Zealand. Key EU products include pig meat, wine and sparkling wine, chocolate, sugar confectioneries, and cookies. These goods will no longer be subject to tariffs.

To safeguard the interests of EU farmers producing sensitive agricultural products, the agreement will implement the Tariff Rate Quotas regime.

This means that goods like dairy products, beef and sheep meat, ethanol, and sweetcorn can be imported with lower or zero tariffs from New Zealand, but only in a limited amount.

The agreement is a breakthrough vis-à-vis sustainability and human rights. For the first time in the history of the EU trade agreements, this latest deal contains a chapter devoted to sustainable food as well as an article dedicated to trade and gender equality.

Ursula von der Leyen did not hide her enthusiasm. She openly stated that “this is a historic moment in our cooperation”. She also said that the deal “is a solid and a modern trade agreement,” while Jacinda Ardern defined it as a “high-quality, inclusive free trade agreement.”

This agreement will potentially help the EU strengthen its economy, currently strained by the ongoing war in Ukraine. As explained by Politico, the recent deal gives the EU more confidence to sign free trade agreements.

Accordingly, it has been difficult for the European Commission to reach and ratify trade deals over the past years, given France's protectionist EU Council presidency. The EU is eager to restart its free-trade engine once the Czech Republic and Sweden, two of the eurozone's strongest proponents of free trade, assume the presidency.

Russia's attack on Ukraine, Politico says, has increased demands for expanding trade with other nations to diversify supply chains, particularly with politically compatible nations, such as those in the Indo-Pacific area, where tensions are also high with Beijing.

This echoes what Jacinda Ardern stated in 2019 regarding the fact that New Zealand and the EU are based on the same core value. These are human rights; open societies and economies; inclusive trade; and social justice.

As global norms and standards are once again jeopardized, collaboration among nations that share the same values is imperative. In this context, New Zealand sees the EU as an important ally, particularly on trade, international peace and stability, and combating climate change.