The Ganga Expressway: A New Marvel 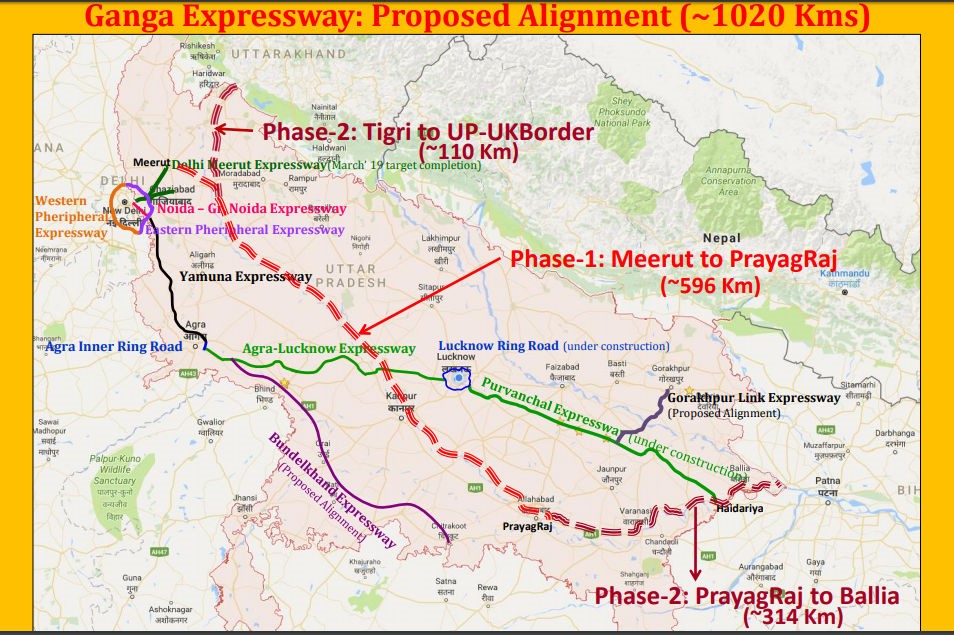 The Ganga Expressway is slated to be a new Marvel in the Road Transportation Connectivity network of India. This Project falls under the category of Expressways in the Types of Roads in India. These Expressways are the highest class of roads that bridge gaps in Intra/inter States. The National Expressways Authority or State Highway of India (NHAI) or state governments operating under the Ministry of Road Transport and Highways are the main bodies that oversee the construction and maintenance of expressways while also facilitating regular tenders for them.

These Expressways are sometimes built through Private Contractors or by Civil Bodies. These can be regulated through transfer over to a corporate entity under concession agreement on a 'build- operate-maintenance-transfer' basis as decided by the State Government or NHAI. The Uttar Pradesh Expressway Industrial Development Authority informed that this expressway project has been divided into 12 packages and it would look after to ensure early construction and proper working.

History about the Project

This project was launched by the Chief Minister of UP, Mayawati in 2007.  With its aim to connect Greater Noida to Ballia, it envisioned ensuring high-speed connectivity between the Eastern and Western boundaries of Uttar Pradesh along the Ganga. The Stretch of this expressway from Ballia to Noida has also been planned to prevent floods and act as a control embankment since floods are a major cause of agricultural and environmental damage in the area. These floods also lead to many deaths as well as the spread of diseases during India's monsoon season and this move would help control them.

The construction work on Ganga Expressway was not started then and had to wait until 2021 because of an order from the Allahabad High Court. This order also instructed the State government to obtain permission from the central government first before embarking on the construction of this Project. Since 2019 the process of acquiring land had begun and as of 30th June, 5,261 out of 7,800 hectares of required land has been acquired.

The Ganga Expressway which is said to connect Meerut to Prayagraj would become India’s Second Longest Expressway when the construction of it begins in September. This is said to reduce the duration between Delhi and Prayagraj from 10-11 hours to 6 hours and would hence facilitate better transportation. The State Government of Uttar Pradesh has acquired more than 80- 90 percent of the total land needed and hence the project has been given a green light.

With a look at major key highlights of this Expressway, this is said to be a brilliant work on the Infrastructure of roads in the country. It would cater to faster trade and commerce while also reducing time on the Highway and enhance transport connectivity. The maximum speed limited on the expressway would be up to 120 kmph. This Expressway is planned to have 6 lanes and is subjected to a further expansion to 8 lanes in the future.

The Different Phases in this project and Financial Occurences

The proposed alignment of this Expressway estimated to be 1020 Kilometres would see construction in Two Phases: namely Phase 1 and 2. The 1st Phase of this expressway is registered to see the route from Meerut to Prayagraj of 596 Kms which would stretch along the length of UP and would intersect the Agra – Lucknow Highway. The 2nd phase will have routes from Tigri to UP- Uttarakhand border. The 2nd phase would see construction on a length of 110 Kms along with an extension corridor from Prayagraj to Ballia which would be around 314 Kms.

Phase I of the construction process for this Expressway which would be around 600 Kilometres long will cover many districts including Meerut, Jyotibha Phule Nagar, Hapur, Sambhal, Budaun, Shahjahanpur, Furrukhabad, Hardoi, Unnao, Rae Bareilly, and Pratapgarh.  This expressway would also be the third Expressway in the state of Uttar Pradesh and would start near Bujauli village in Meerut to finally terminate at the village of Judapur Dandu in Pratapgarh District.

According to reports, the Uttar Pradesh Expressways Industrial Development Authority (UPEDIA) has already begun its processes to issue tenders for this project that would commence soon. The process of issuing tenders to civil contractors would commence in August 2021. With further extensions being decided yet, reports suggest that this project may be extended till Varanasi in the future. As of now, approximately 519 villages are said to be connected to this expressway which would bolster their growth.

This project is expected to be built at Rs 36,000-Rs 42,000 crores and is expected to culminate in a total of 26 months. The total cost of construction for the first phase of the project is now estimated to be Rs 35,952 crore eventually. The Funding Details have also been reported with the funding for this project comprising of 70% debt and 30% equity combination that would see a major influx of amount strengthening road transportation In that region.

Several major decisions have also been taken with regards to other monumental features that would be constructed on this Expressway. With the initial layout of this project deployed, there will be 14 major bridges, 126 minor bridges, eight roads over bridges and 18 flyovers to be constructed on this stretch.  The details also highlight a 1 Km long bridge on the River Ganga and a slightly smaller 720 meters bridge over Rāmgangā.

Alongside these features, the Indian Air Force also seems interested to utilize this stretch of land with the airstrip that was developed in the Sultanpur district. This would be used by the Air force for their purposes and in addition to that to check and safeguard movement of stray cattle and locals, order for construction of a precast concrete boundary wall beside it has also been initiated.