The great Indian desire and its cultural denial. 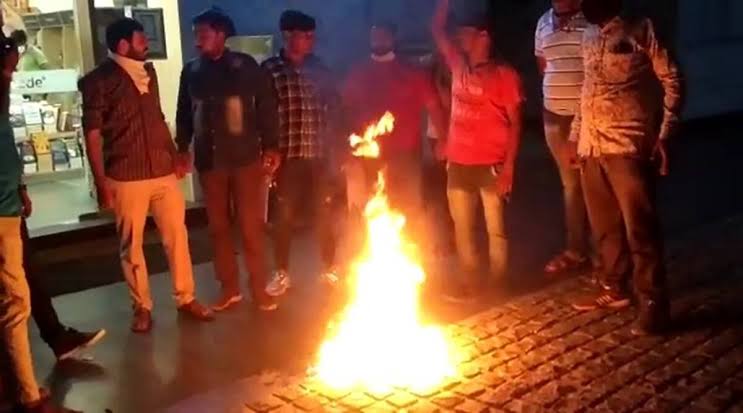 On account of Janmashtami, while most of the country was celebrating Lord Krishna’s birth, members of the Bajarang Dal burnt a single copy of Kamasutra in Ahmedabad, Gujarat.

As a protest over the book's obscene representation of Lord Krishna, a dozen Bajarang dal members set fire to it. They said it has hurt their sentiments that Lord Krishna was portrayed in such a manner. They also mentioned an insult towards Hindu deities. “Hindu gods and goddesses are portrayed with vulgar poses and the Bajarang Dal will not be able to bear this misbehaviour with Hindu religion”, a member can be heard saying in a video. “We are going to burn this book outside in protest. We are giving warning to every book store owner that if you do not show respect to the Hindu dharma, today it's a book that we have burnt tomorrow it could be a bookstore”.

The incident comes as no shocker as the outfit is known for its ultra-conservative mind set. The group refuses to acknowledge the ancient Hindu text.

Kamasutra is an ancient Hindu text written in Sanskrit during the second or third CE by Vātsyāyana, an Indian philosopher. Mentioned in the Manusmiriti, which is one of the dharmashastras or the code of conduct to be followed, says that a woman should be a virgin until she is married. Kamasutra explores the sexual satisfaction of a woman after marriage, as she is still a virgin

Kamasutra comes in line with some texts of the Manusmriti, written for the ultimate pleasure of a woman after marriage. This book is considered to be a sex manual throughout a man’s life to satisfy his lady, about one’s love life and how one should stick to one partner his/her entire life.

The text acknowledges the Hindu concept of Purushartas which means ‘object of human pursuit’. One of the proper goals of life, according to the Kamasutra, is lust, sexuality and emotional satisfaction. The chapters of Kamasutra speak about wooing a woman, how and when to commit adultery, maintaining a power balance in marriage, sex positions for maximum satisfaction. The book was so ahead of its time that some also callVātsyāyana, India's first feminist. The idea of pleasure was highly frowned upon when this book was written.

Mythological stories have influenced Indian society into frowning upon sex and sexual desires. It should only be practised for reproduction and not desire. Kam-dev or the God of Pleasure once interrupted Shiva during his meditation. Shiva got disturbed and destroyed the god of pleasure with his third eye. Lord Krishna, although being in love with Radha, and understanding the emotion of love, has famously said that “a man should at times control his desire for the better”. There are many temple carvings and wall inscriptions found all across India with Kamasutra figures. Such is the Khajuraho group of monuments located in Madhya Pradesh, about 175 km from Jhansi has Kamasutra-inspired figures handcrafted on the walls of its temples. It is a UNESCO world heritage site, known to people and explorers all across the globe.

This selective adoption of texts has left modern Indian society into splits. Groups like Bajarang dal endorse this super conservative ideology where desire is an extremely personal matter and should not be spoken openly out in public. This has given hand to orthodox people supporting the idea of a conservative and pseudo-respectful society. The burning of books and the open threats to booksellers have made it clear that these outfits live in complete denial. We are not clear how the gods and goddesses were shown in the book sold by that bookseller, but the actions of Bajarang Dal cannot be justified whatsoever. India is infamously known for having a taboo towards sex. We need to emphasise the fact that desirable sex has been part of our culture, and we should be ready to embrace it. The world looks at Kamasutra and it never fails to amaze them how sexual and other desires were written about, centuries ago in India.