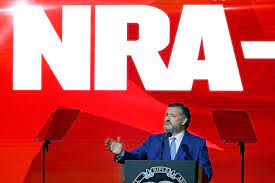 Many people are looking to Texas Senator Ted Cruz for a response to the school shooting at Robb Elementary School in Uvalde, Texas, in which an 18-year-old gunman killed nineteen students and two teachers.

Three days after the deadly incident, on Friday, May 27, there was a National Rifle Association (NRA) convention in Houston, Texas. While some Republican lawmakers have left the NRA in the aftermath of the shooting, Cruz attended and delivered a 30-minute speech arguing that guns were not to blame. According to an article by Chron, he blamed the Uvalde tragedy on a culture of absent fathers and moral decay, and claimed that “good guys” with guns were the solution to mass shootings.

Cruz dined in a restaurant after the convention, where Benjamin Hernandez confronted him. Hernandez is a former congressional candidate who was in Houston at that time because his digital advertising company was livestreaming the protests outside the Republican National convention. He happened to be at the same restaurant as Cruz.

Indivisible Houston posted a 2-minute video of the entire confrontation. Hernandez initially approached Cruz by asking for a photograph. After they posed for the fake photo and the video began, Hernandez began questioning Cruz about his refusal to support stricter gun control laws, including background checks. Cruz claimed that the Democrats’s proposals would not have prevented the massacre. As the conversation heated up, Hernandez was eventually escorted out of the room by security.

Cruz is known for dodging and dismissing interview questions in heated situations. A day after the shooting, he was interviewed by Sky News reporter Mark Stone in a similar incident. Stone began by asking Cruz if the Uvalde shooting represented an opportunity to reform gun laws. Cruz claimed that the reporter was politicizing the tragedy and that the Democrats’s reform proposals would have been ineffective once again. Cruz accused Stone of not appreciating the United States after Stone noted that America is exceptional when it comes to mass shootings, asking, “Why only in America?”

When walking away from the interview, Cruz said, “Why is it that people come from all over the world to America? Because it’s the freest, most prosperous, safest country on Earth. Stop being a propagandist.”

While the country may be one of the freest and most prosperous in the world, many people would consider it a “slap in the face” to be told it is also the safest. After the confrontation, Hernandez told Insider that he has never done anything like that before, but as a scared American citizen and father, he believes the confrontation was necessary. Hernandez concluded the interview by stating the citizens must bring the issue to the politicians’s attention because "The moment is now. They're [politicians] always gonna say, 'Now is not the time…’ But, you know what, it is the time. Now is the time to stop the next one."