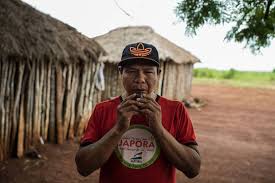 Increasing violence and murders have been happening in the Amazon region of Brazil, but not only in the forests. In the first half of 2022, 759 episodes of "no-campo" conflicts were recorded in Brazil, involving 113,654 families.

So far this year, the accredited organization Comissão Pastoral da Terra (CPT) has recorded 33 murders, 25 in the first half of the year alone. Compared to 2021's first half, the total increase in the number of murders is 150%, with 30.30% of those related to firearms, the highest percentage since 2018.

The report underlines the seriousness of the murder of children and young people. It is also necessary to reflect on the attempt to assassinate the country's future and the permanence of the original peoples and peasants in their territories.

Violence has been recorded in all areas of conflict considered by the CPT, mostly involving land conflicts. The main types of violence in the first half of 2022 were prison riots (16.82% of the total), followed by attempted murder (10.28%), intimidation (9.35%), and death threats (9.35%).

In the first half of 2022, the CPT registered 74 women victims of violence. Five women were killed, the highest number recorded since 2016.

Notably, the populations that suffered the most violence in the countryside were indigenous peoples, quilombolas, squatters, and rural workers without land, according to CPT data.

These statistics show how in an aggressive climate, those who suffer the most are minorities and systematically marginalized people. Among the victims are leaders who defended human rights and nature. According to the analysis of the data for the period 2016-2021, over 10 thousand conflicts occurred involving 5.5 million people.

Many hope that with the newly elected president Lula, these matters will acquire more relevance both on a national and international level. Moreover, effective legal measures and preventive behaviors need to be in place to grant protection to ethnic minorities and socially vulnerable individuals.