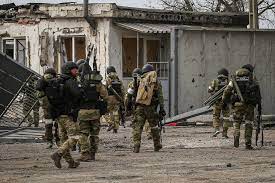 Although news regarding the war between Russia and Ukraine has decreased in volume among the media, that doesn’t mean the war has ended in any way. Here are the latest news and developments in the Russia-Ukraine War everyone should know.

Russia has begun another large attack upon the Ukrainian city of Mykolaiv on Sunday. Officials say that 10 missiles landed all across the city, causing vast industrial damage. This is the second attack in less than a week targeted towards Mykolaiv by Russia. “As a result of rocket strikes, buildings were destroyed and fires started,” said Oleksandr Sienkevych, the mayor of Mykolaiv. There has been no updated information on injuries or casualties caused by the missiles.

In Vinnytsia, Ukraine, friends and family mourn the death of Liza Dmytriyeva, a 4-year-old girl with down syndrome who was caught in a blast of fire and shrapnel along with her mother Iryna while they were on a walk near their home. Iryna lost a leg during the explosion and remains unconscious in the hospital. The blast came from a Russian cruise missile strike similar to the missiles fired in Mykolaiv the same day. The funeral for Liza was heartbreaking and beautiful as tens of loved ones joined to mourn her loss.

The Luhansk region of Ukraine has been one of the main points of tension throughout the war, and as of late Russia has been taking most of the control. However, Ukrainian officials say that they still have control of two critical villages in the region, despite Russian officials stating they have clear control. The villages of Bilohorivka and Verkhnokamianka are located about 10 miles west of the city of Lysychansk, which has become the last major hold out for Ukrainian forces in the Luhansk region.

“One of the villages has already been captured by the occupier several times, but each time our troops pushed the enemy back to their previous positions,” said Serhiy Hadai, the leader of the Luhansk region’s military administration. He stated that Russia would not stop, but the Luhansk forces have been able to cause much more loss on Russian forces than they would have wanted.

Tensions in Ukraine are still high, and this war does not seem to have a foreseeable end just yet.