The QUAD Summit: All you need to know. 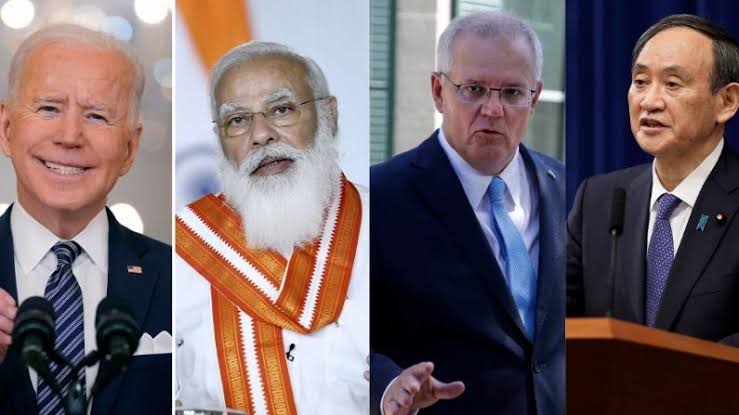 The contemporary world is no longer a plethora of many countries but rather an intricate web of relations and alliances between nations for the purpose of achieving shared goals. With the world getting more and more interdependent with regard to trade, economic development, and the distribution of wealth and resources, alliances between nations are imperative for the mutual fulfilment of their individual needs. Many such intergovernmental alliances have been formed in the past, e.g. NATO, UN, WHO, etc. India has also been a part of many such IGOs, the latest of which is a four-country dialogue called QUAD.

The QUAD is a collective of four economic and military superpowers, namely Japan, India, Australia, and the US. The QUAD was formed in 2007, initiated by the then Japanese prime minister, Shinzo Abe, with the support of Australian Prime Minister John Howard, Indian Prime Minister Dr. Manmohan Singh, and US VP Dick Cheney. The collective was formed to counter the increasing Chinese influence over the global economy and military. The Chinese government mocked the formation of such a collective and called it “The Asian NATO”. It was highly protested against by Chinese diplomats and allies of the Chinese.

The QUAD was disbanded after Australia, under the leadership of PM Kevin Rudd (Dec 2007 to June 2010), withdrew its participation from the collective. This was a direct result of Australia's policy to remain neutral amidst the rising US-China military conflicts. The rest of the three nations still exercised allegiance by performing joint military drills under the banner of Exercise Malabar and through diplomatic talks from time to time.

During the 2017 ASEAN Summits in Manila, all four nations under new leadership (Australia under PM Malcolm Turnbull, India under PM Narendra Modi, and the US under President Donald Trump) decided to revive the alliance once again to counter the Chinese through military and diplomatic means in the Indo-Pacific region, particularly the South China Sea.

The QUAD was created to create an open and free Indo-Pacific region. While the primary focus of the quad was a collective response to counter the effect of COVID-19 on trade and healthcare, it also attracted the active participation of other countries, i.e., New Zealand, Vietnam, and South Korea. The sharing of resources, knowledge, and goodwill amongst these “Like-Minded nations” working towards a shared vision gave birth to a multi-nation alliance termed Quad Plus.

The latest QUAD summit is to be held on May 24, 2022, in Tokyo, where the leaders and diplomats of all four nations will be having bilateral talks and collective discussions on various topics ranging from the Russo-Ukraine war to various regional and international situations. PM Narendra Modi arrived in Tokyo on Monday morning and is slated to hold bilateral talks with US President Joe Biden, Japanese PM Fumio Kishida and newly-elected Australian PM Anthony Albanese during the two-day trip.

The Russia-Ukraine War has been the hot topic of discussion in the geopolitical scenario, with India treading a light rope due to its history of alliance with Russia. PM Modi will almost certainly be discussing the impact of the war on relations with Russia, as well as the next step toward Global Harmony.

Another challenge faced by India is the overcrowded influence of China in the Indian Ocean. China has built ports around India, including Gwadar in Pakistan, Chittagong in Bangladesh, Hambantota in Sri Lanka, and Kyaukpyu in Myanmar (Myanmar). This essentially surrounds the Indian subcontinent by the Chinese military, which is referred to as the Chinese encirclement strategy. In such a dire situation, building strong alliances with technologically superior nations such as Japan and the US is a smart strategy.

In a joint statement issued after the foreign ministers of the four countries met on March 3 for the finalisation of the arrangements, the member nations pledged their "commitment to a free and open Indo-Pacific, in which the sovereignty and territorial integrity of all states is respected and countries are free from military, economic, and political coercion." Although a lot of countries feel that the QUAD was created to manage China's growing might in the region, the Indian ambassador to Japan, Sanjay Kumar Verma, insisted on Sunday that the Quad had a "positive agenda" and it does not target a particular country.

On Monday, PM Modi, was greeted by the Indian diaspora in Tokyo. As both India and Japan are considered countries that value their traditions and customs a lot, the camaraderie and acknowledgement of each other's culture was clearly visible in this event.

PM Modi is also set to have a conference with businessmen from Japan, potentially attracting foreign investors and collaboration in Indian endeavours.

The QUAD can prove highly useful by creating collaboration and joint ventures between the four superpowers of the modern world. Apart from the military agenda, the summit also focuses on building a working network for the development and supply of technology, particularly in the fields of 5G networks and semiconductor devices.

The alliance, if rightly utilized, can pave the way to a better, cleaner, and more technologically fluid world.

India Faced Its First Armed Drone Attack: Why is no one talking about this?