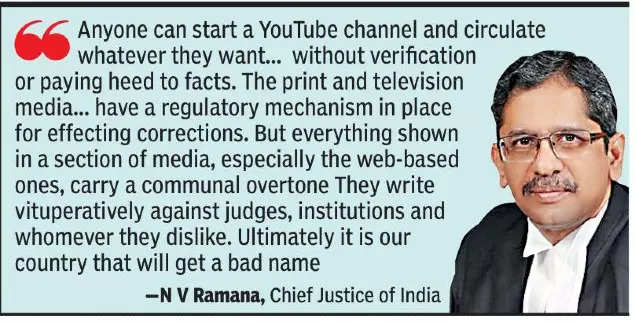 Today, the Supreme Court conveyed that these fake news are circulated by some media outlets and web portals, stating they only care about powerful individuals, not judges, institutions, or regular people.

"Digital and social media platforms largely listen to powerful guys," the Supreme Court said, according to Bar and Bench.

The court was hearing a petition from Jamiat Ulama-i-Hind and the Peace Party asking it to stop circulating false information about the Tablighi Jamaat gathering in Delhi in March 2020, which is linked to the spread of COVID-19 in the country. The complaint launched against the communalization of the Nizamuddin Markaz, by some sectors of print and electronic media last year, endangering the life and liberty of Muslims' and also violating their constitutional rights under Article 21, was dismissed by the Court.

The sad event of the Tablighi Jamat was used to demonize and condemn the whole Muslim community, according to the appeal filed by Advocate Ejaz Maqbool.

The petition claims that such reporting has fueled community animosity and religious prejudice, disturbing communal peace. By neglecting to act against unsocial elements, the state has failed to fulfill its responsibility under Article 14 of the Constitution to offer equal legal protection to all citizens of India.

The News Broadcasters Association's Code of Ethics and Broadcasting Standards, which governs news stations, was claimed to be violated by certain segments of the media. Derogatory images or words aimed at religious groups are also prohibited by Rule 6 of the Cable Television Network Rules of 1994.

A growing number of web portals and YouTube channels spewing defamation, false news, and intentionally skewed stories with communal undertones will “ultimately bring a bad name to the country,” the Supreme Court warned on Thursday.

An interim bench of the CJI and Justices Surya Kant and A S Bopanna reopened the case of the Jamiat Ulama-i-Hind, which had complained about the spread of fake news and biased reporting to defame Tablighi Markaz.

According to Mehta, with the new Information and Technology laws, we tried to strike a balance between the media's freedom of speech and people's right to reliable information. According to the rules, digital portals and channels must be held accountable for the content they publish.

This week, the SG said that the new IT regulations had been challenged in numerous high courts, and requested that the SC transfer all outstanding high court cases to itself so it can rule on the rules' legality.

"Unreliable reporting is becoming increasingly popular among a segment of websites", says Mehta. “The new IT rules seek to strengthen government accountability for the media and the news they report. We sought a balance between free speech and the opportunity to rectify misinformation through a three-tiered approach. Assailants have three options: complaint to the media, which has 15 days to rectify or react to the allegation. If no action is taken or the complaint goes unanswered after 15 days, the authorities can step in,” he added.

N.V. Ramanna, Chief Justice of India, commented, "No public channels on Twitter, Facebook, or YouTube. Those who criticize institutions do not respond, saying that this is their right." In regards to online sites and channels, the CJI had not yet expressed his displeasure. “They spit on judges, institutions, and everyone they dislike. They never address questions about their reports. They claim the right to publish anything they choose." “No control,” Ramana grumbled.

The court also claimed that some internet media 'give a communal flavor to the news.'

Solicitor General Tushar Mehta noted that the new Information Technology Rules 2021 are meant to correct this. He also asked the CJI's Court to consider the Centre's appeals against the IT Rules pending in various High Courts and sought that the Bench considers the Transfer petitions relating to Web Portals and Media Regulations. The CJI agreed and ordered a rehearing in six weeks.

Solicitor General Tushar Mehta has been served with copies of the petitioner's modified plea by the three-judge bench led by Chief Justice N.V. Ramana. "Go to YouTube to see how much bogus news there is. Web portals are unregulated. The issue is that the news is being colored by the community. It eventually harms the country's image", NV Ramana, Chief Justice of India, said.

He also added “Let go of people. Those who spread such ideas on behalf of the organization bear no responsibility.” He said he hasn't seen any public response or Twitter response. They care about powerful men, not judges.

"Your Lordship, detail affidavit is filed and such is filed by Secretary," SG Mehta said today. "The booklet also included dos and don'ts.”

News Broadcasting Association spokesperson Nisha Bhambhani said they "fought the Modification Regulations 2021 and got a court ruling that no coercive action will be taken against them."

“The fight between freedom of expression and citizen rights,” SG said. In addition to the restrictions, he added that the Supreme Court is examining an application for a transfer.

"I'm unaware of any online portals," CJI said. "YouTube shows a lot in a minute. Does anyone understand how to handle this?"

“Yes, the Rules provide for processes. The Cable TV Act provides a statutory structure. Online portals are governed by distinct rules. There are three: self-regulating, interference, and so on.”, Sr. Adv Hegde approves of the SG's suggestion. Online portals are restricted, and the UOI has filed Transfer Petitions.

The SG requests that the IT Rules subject be scheduled for next week. He adds that the regulations are being challenged in various appellate courts and rulings are being issued.

Counsel for the petitioner requested four weeks to alter the plea and submit a counter-petition, the bench ordered. SGI should get one. SG may also retort.

“Let the transfer request be listed with this petition,” the CJI states.