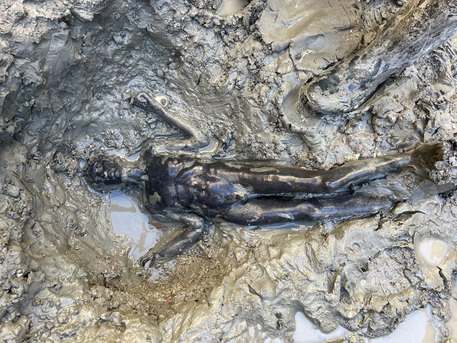 The existence of the votive deposit had already been known for several months: now, the research team has revealed further details on the statues found on the site to Ansa.

It is a votive collection like nothing has been seen before, with bronze statues of very refined workmanship, five of which are almost one meter high, all intact and in perfect condition.

"A discovery that will rewrite history, on which over 60 experts from all over the world are already at work," archaeologist Jacopo Tabolli announces. He has been leading the project with the Ministry of Culture grant and the small municipality's financial support.

He adds an “absolutely unique” treasure, which is accompanied by an incredible amount of inscriptions in Etruscan and Latin, adding thousands of coins and a series of equally interesting vegetable offerings.

The discovery also called the newly appointed Minister of Culture, Gennaro Sangiuliano, to Tuscany, who immediately visited the restoration laboratory that had just received the statues. “An exceptional find - comments the minister - which confirms once more that Italy is a country made up of immense and unique treasures. Moreover, the stratification of different civilizations is unique in Italian culture”.

Massimo Osanna, the museum's director general for the Minister of Culture, shares his excitement: "It is the most important discovery from the Riace Bronzes and certainly one of the most significant bronzes ever made in the history of the ancient Mediterranean."

He has just approved the purchase of the sixteenth-century building that will house in the village of San Casciano, the wonders returned from Bagno Grande, a museum to which an entire archaeological park will be added in the future.

Luigi La Rocca, general director for archeology, emphasizes "the importance of the method used in this excavation," which was also used for the more recent discoveries in the Ancient Roman city of Pompeii. Just like the latter, San Casciano can be a hotbed of discoveries.

According to experts, the 24 newly found statues can be dated between the II century BC and the I AC. The sanctuary, with its pools, sloping terraces, fountains, and altars, has existed at least since the III century BC.

He says it remained active until the V century AD when it was closed after the advent of Christianity but not destroyed. Instead, the tanks were sealed with heavy stone columns, the deities in the water.

It is also for the same reason that, having removed that cover, the archaeologists found themselves in front of a treasure still intact, in fact, "the largest deposit of statues from ancient Italy and in any case the only one of which we have the possibility to completely reconstruct the context," Tabolli reiterates.

The excitement of archaeologists, the superintendency, the Municipality, and the Ministry of Culture is palpable. Maybe soon, the small village will begin to attract visitors just like the Riace bronzes exhibited at the National Archaeological Museum of Reggio Calabria.