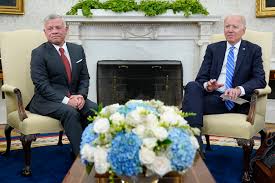 Jordan’s King Abdullah II is likely to visitthe White House, as the violence has increased in East Jerusalem’s Al-Aqsa compound during the holy month of Ramadan. Over the last few years, Palestinian protesters have repeatedly clashed with Israeli riot police at the Al-Aqsa compound. The third-holiest site in Islam, also known as Noble Sanctuary, was occupied by Israel in 1967.

Two weeks ago, Israel banned non-Muslim visits to the Al-Aqsa compound until the end of Ramadan. In response, Jordan has saccused Israel of undermining a centuries-old tradition by forbidding non-Muslims from worshipping in the mosque compound. This was not a good step toward easing tensions and restoring calm, Jordan's Foreign Minister Ayman Safadi said.

The escalation of violence in the Al-Aqsa compound has sparked international fears of conflict, like it was a year ago during the 11-day war between Israel and militants in the Gaza Strip. While Egypt pushed the parties to a cease-fire agreement last year, this time, Jordan will act as a mediator.

The Hashemite family, which King Abdullah II descends, has custodianship of the Muslim and Christian sites in East Jerusalem. As the current developments in East Jerusalem are shaking up the region, the Jordan ruler is likely to turn to the U.S., his strategic international partner in the Middle East, to defend custodianship. However, there is no confirmation that King Abdullah II will visit President Joe Biden at the White House and when he will be there.

King Abdullah II’s upcoming visit to Washington comes at a time of an escalation by Israel, which affects the yet precarious stability of the region. Given this, the priority of the visit of the Jordan king will be the issue of the Al-Aqsa compound.

“His Majesty’s visit to the US will no doubt focus on the need for quiet in the holy city of Jerusalem and that all efforts be made to ensure the historical rights of the city according to international law. This will take most of the discussions with the American administration. Everyone wants peace and quiet in Jerusalem,” Mohammad Al Momani Momani, a Jordanian senator and former government minister, said.