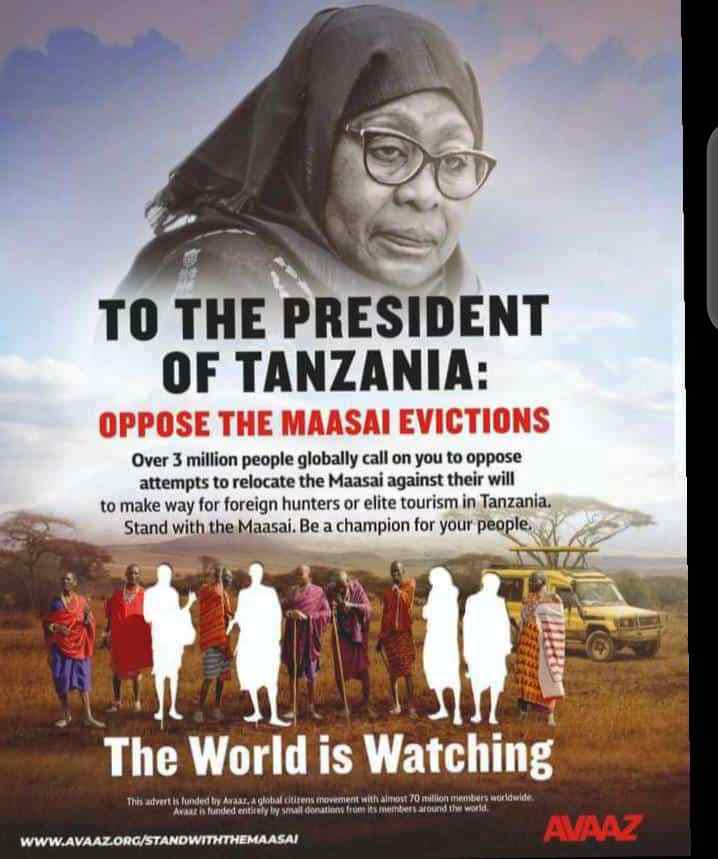 "It pains me when I see such young angels being left behind, stranded, unprotected, unattended, unfed, and unsheltered. Our women are being harassed; our mothers and fathers are shot like gangsters, and the young men are brutally killed. Not because we are terrorists, neither have we denied paying taxes to the government, nor have we fought with our neighbors, but we are hated for having resources, vast lands for our livestock, and for being too friendly to everyone. A time for liberation is knocking on the door...we will fight to the death for this one. Nogorongoro is our homeland”, says my game guide friend with feelings of deep sadness and exasperated powerlessness as he watches what happens to his community and family living in Loliondo and Ngorongoro surrounds become brutalized and intimidated. The Maasai of these villages only have spears and clubs; the government armies and police arrive with heavily armed vehicles and guns.

It appears as if the Tanzanian government is hiding behind the smoke screen of conservation in the name of elite tourism and game hunting, but still, the real agenda is financial gain.

The invasive dismantling of humanitarian rights began in 1959 when the Masai in Serengeti were moved from their homelands for conservation purposes. Since then, they have never felt settled as further evictions were pending. It is all about the distribution of resources, and instead of working it out in a humane way to benefit the people, the land, the livestock, and the wild animals, forceful and violent means are being used to create poverty, marginalization, and destruction of close-knit communities, families whilst destroying personal dignity and trust,

In March 2019, a joint monitoring mission from the UNESCO World Heritage Centre (WHC), the International Union for the Conservation of Nature (IUCN), and the International Council on Monuments and Sites (ICOMOS) asked the Ngorongoro Conservation Area Authority (NCAA) to urgently control population growth in the NCA, framing it as the leading cause of environmental degradation there. The Tanzanian government responded by producing a Multiple Land Use Model (MLUM) and Village Resettlement Plan.

First, the new MLUM recommended resettling all 97,000 indigenous and legal residents of the NCA to re-design it as a Game Control Area to license trophy hunting. As an alternative, the Ministry of Natural Resources and Tourism proposed that the NCA be divided into four management zones with varying land use regulations (core conservation zone, conservation sub-zone, transition zone and settlement, and development zone). This designates at least 82% of the area for conservation, making access to pastoralism illegal and leaving only 18% (2,230 km²) for "settlement and development".

Under this proposal, the government would have to resettle over 80,000 community members into areas that, according to Maasai leaders, cannot sustain their traditional livelihoods. This is particularly devastating given the acute hunger and food insecurity that 70% of Maasai residents already face with the existing restrictions – including restrictions on subsistence cultivation. The result is increased poverty (which already affects 50% of Maasai residents), widespread starvation, and disease, especially among children.

This imposed plan was not developed in consultation with community leaders. When we consider the impact of tourism and hunting on conservation and that most humans live in an eco-alienated way that is making it difficult for the earth to continue to be self-replenishing, it is uncanny and unwise to consider getting rid of some of the top conservationists in the world – the Maasai – who know well how to live interdependently with wildlife and Mother Nature.

The Maasai are peace-loving pastoralists, and even though I personally do not believe in cattle or goats being the livestock of choice anywhere in Africa, as they can cause desertification, the Maasai people in Loliondo and Ngorongoro surrounds:

·         Have already been moved time and time again. The deepest human need is a sense of belonging

·         With the few financial means at their disposal, they see educating their children to take care of the future as a very high priority

·         They have tried negotiating with the government offering habitat encroachment solutions, but to date, there have been no joint problem-solving negotiations only a complete violation of their physical and emotional health and survival.

There is an urgent call for protection and for more humane solutions to be found. The Maasai people appeal to the East African Court and the International community for help. It is apparent to them that the current Tanzanian government’s weapon of war is using violence and poverty, despite the fact that history reminds us over and over again violence and removing a person’s human rights have never been a sustainable way of moving forward into the future.