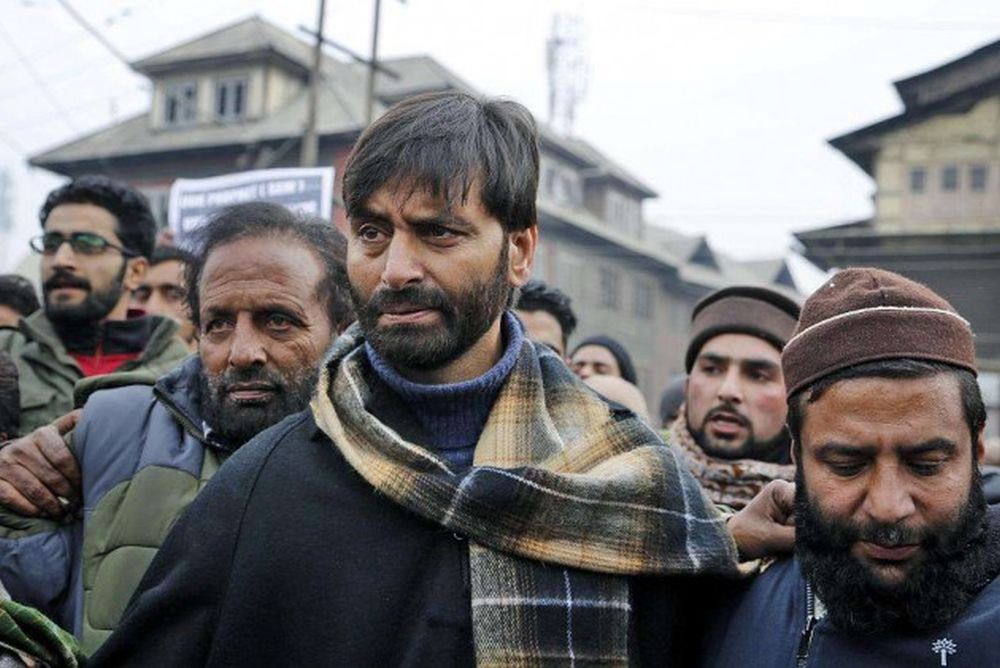 Yasin Malik, a separatist leader and the face of the Jammu and Kashmir Liberation Front (JKLF), was sentenced to life imprisonment by an NIA court in Delhi on May 25, 2022. Since its establishment in June 1976, JKLF has been an armed militant organization advocating for the freedom of J & K from both India and Pakistan into a separate entity of its own.

Malik was born in 1966 in Maisuma, Srinagar. He was a very public supporter of anti-Indian ideologies and movements from his early days. He joined a local rebel group known as "Tala," which was responsible for upsetting the peace in the Valley and disrupting the 1983 cricket match between India and the West Indies at the Sher-e-Kashmir stadium.

The turning point for Malik occurred in 1987 when the Indian government was suspected of rigging assembly elections in cooperation with the National Conference, the region's primary pro-India political party, which had ruled for over seven decades. In that election, Malik was campaigning for Muhammad Yusuf Shah, one of the prominent figures of the Muslim United Front (MUF), a union of political groups demanding freedom from India. Analysts say the MUF was apparently on its way to victory when the polls were rigged.

The alleged rigging of the 1987 polls sparked unprecedented anger in the region, which resulted in hundreds of youths crossing over to Pakistan-occupied Kashmir to gain military training. Malik came back from Pakistan in 1989 to lead the JKLF. Muhammad Yusuf Shah is now based in Pakistan under the name Syed Salahuddin. He heads the Hizbul Mujahideen, one of the prominent anti-India armed groups.

Malik and his subordinate, Farooq Ahmed Dar, better known by his nom de guerre, Bitta Karate (for his immense proficiency in hand-to-hand combat), committed violent acts of terrorism against Kashmiri-based Hindus and supporters of India's "illegal" occupation of Kashmir. The two played a significant role in the exodus of over a thousand Kashmiri pandits who were forced to run away from their homes in Kashmir. In the recent film 'The Kashmir Files', the antagonist character of Farooq Malik Bitta is loosely based on Yasin Malik and Bitta karate and on countless other oppressors who existed at that time

Malik was arrested in 1991 for kidnapping the daughter of a politician and leveraging her freedom in exchange for releasing political prisoners. He was put in solitary confinement for three years, and when he came out of prison in 1994, he claimed to have become a Gandhian. He publicly admitted having shot dead four IAF officers in Srinagar and stated that he regretted his past actions.

When Malik was hospitalized for a severe injury, he realized that the two Hindu physicians who were treating him knew who he was. They could have neglected him, perhaps even have considered him their enemy. Nevertheless, they treated him with the utmost compassion. Like so many others who have changed their attitudes and actions toward enemies, Malik recalled having been shown compassion in a time of need as an essential step in his journey. After coming out of prison, he wanted to turn to non-violence to solve the Kashmir issue. This garnered the respect and support of many Kashmiris, who started looking up to him as a freedom fighter instead of a tyrant.

Malik was named as one of the suspects in a terror-funding case that the NIA has been looking after since 2017. The NIA said in the FIR those Kashmiri separatists were receiving money from Pakistan, particularly from Hafiz Saeed of the Lashkar-e-Taiba and Syed Salahuddin of the Hizbul-Mujahideen, to incite unrest in the Valley through stone-pelting, school burnings, and strike and demonstration organization.

The NIA arrested over a dozen separatist leaders, Malik being one of them, and interrogated them for further information. During the interrogation, Malik admitted to being responsible for organizing and unifying various factions of various political parties into one conglomerate working towards a shared goal.

During the investigation, it was also found that separatist leaders had set up an elaborate structure and mechanism to raise funds for carrying out terrorist and other unlawful activities in Jammu and Kashmir under the facade of "freedom struggle". Searches were conducted at various places in J & K, Delhi, and Haryana, and a ton of electronic and documentary evidence was recovered. The evidence pointed to a pattern and a structure of raising, collecting, transferring, and using the funds for terrorist and separatist activities.

Yasin Malik was finally sentenced to life imprisonment on May 25, 2022, by a special court hearing of the NIA. He pleaded guilty immediately and had not even opted for counsel. Even when the court provided Malik with a lawyer to help him understand the scope of punishment he could be getting, he still pleaded guilty without a fight. This was a surprise to everyone and has triggered his supporters in J & K.

There were incidents of protests and stone-pelting in Srinagar following the announcement of the life imprisonment sentence. Ten youngsters were arrested for disturbing civil peace in the Maisuma province of Srinagar for stone-pelting. The government hopes to send a clear message by arresting Yasin Malik that the Indian government will not accept separatist ideologies in Kashmir.