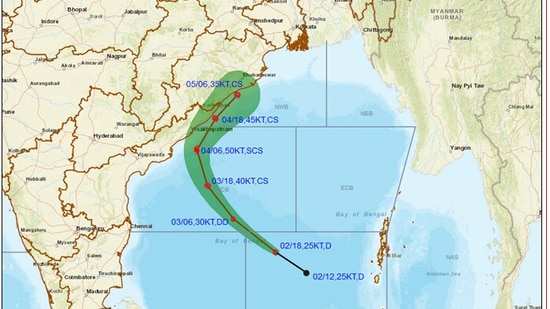 KJ Ramesh, one of our top meteorologists, claims that climate change has resulted in more frequent and intensified occurrences of cyclones in India. Rising water temperatures in the Bay of Bengal and the Arabian Sea have fostered storm formation in the region. Once again, another fear of a cyclonic storm looms over the Odisha-Andhra Pradesh coast. Before hitting the Odisha-Andhra Pradesh coast, cyclonic storm Jawad would diminish into a deep depression. This news comes as a relief to the eastern state that has already been devastated by two cyclones, Gulab and Yaas, in recent years.

In the aftermath of the cyclone, the National Disaster Response Force has sent 19 teams to the state.

At around 2:41 p.m. today, West Bengal reported light rainfall with apprehensions of increasing wind speed as the cyclone nears. Meanwhile, the locals in the coastal areas of Digha have moved to safer places. Multiple relief camps are functioning to provide the basic facilities to those present there. As cyclone Jawad loomed over the Odisha-Andhra Pradesh coast on Saturday, the West Bengal government evacuated thousands of people in the South 24 Parganas and Purba Medinipur districts and encouraged tourists in popular coastal resorts to stay away from beaches.

Cyclone Jawad is showing a northward movement and may continue in the same direction for the next 12 hours.

According to the IMD Director for Bhubaneshwar, the cyclone's strength is diminishing as it moves northwards and is expected to hit the coastal districts of Puri tomorrow.

Special Relief Commissioner (SRC) PK Jena said that the West Bengal government had instructed district authorities in Ganjam, Khurda, Puri, Jagatsinghpur, Kendrapara, and Niali in Cuttack district to evacuate residents living in susceptible dwellings and low-lying regions. However, the projected wind speed is mild, unlike the earlier cyclones. Therefore, there may not be a need for blanket evacuation. The latest report by the IMD suggests that the cyclone has weakened into a deep depression as of 1730 IST on Saturday.