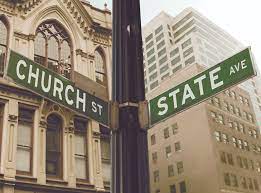 This week, activists all over the country marched in protest of the Supreme Court’s decision to revoke women’s abortion rights. The ruling revealed an underlying controversy that permeates many other recent cases: the government’s endorsement of Christianity.

On Friday, in Dobbs v. Jackson Women’s Health Organization, the Supreme Court voted 6-3 to uphold Mississippi’s law banning abortions after 15 weeks. The ruling overturned the precedent set in 1973 by Roe v. Wade regarding the right to terminate a pregnancy.

The six conservative justices that ruled in favor of upholding the Mississippi ban reflect a concerning ideology that the government should impose a religious and moral vision, given that the arguments against abortion rights stem from Christian beliefs.

Those six justices are all current or former members of the Federalist Society, an organization created in 1982 to promote conservative-minded judges who impose Christian ideologies on the American public.

A majority far-right, Christian judiciary means that many federal court rulings reflect a preferred religious affiliation. Last week, the Supreme Court struck down a Maine law that excluded religious schools from a state tuition program. The decision forces the state to fund religious schools regardless of their discriminatory practices.

On Monday, the court ruled that a public high school’s football coach had a right to lead his team in prayer after games. The dissenting judges argued that students had felt coerced to participate in the religious activity despite not sharing their coach’s beliefs.

The decision opposed the Supreme Court’s rejection of prayer in public schools over the last 60 years. As recent as 2000, the court ruled that student-led organized prayer at football games violated the First Amendment’s prohibition of government-endorsed religion.

Monday’s decision also disavowed the long-established Lemon test, which the court used to determine whether a government action had a secular purpose. Any activity that did not pass the test would be prohibited.

Today’s court said that a history-only approach would be used in place of the old method. However, the court did not specify the new historical test it would implement for such cases.

The Supreme Court’s far-right rulings over the past month have reflected a religious endorsement in the face of long-standing policies that separate church and state.

A Constant State of Reckoning: What Recent Roe v. Wade Rulings Reveal about US