Translocation Of 8 Cheetahs To India Successful: What Protocols Were Followed? 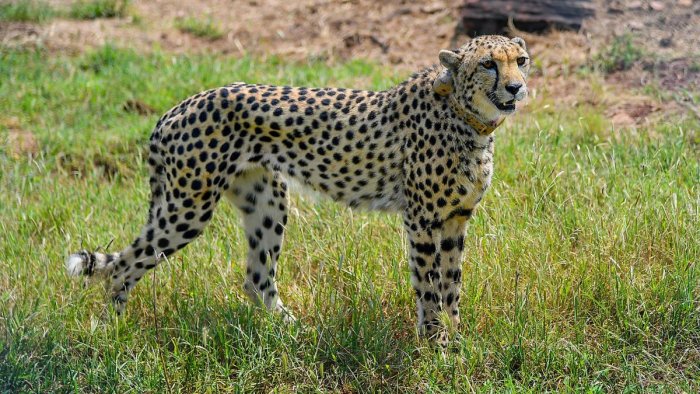 Cheetahs made a magnificent comeback on Indian soil on September 17th, marking a new hope for ecological conservation in the country. The eight cheetahs were transferred from Africa's Namibia after much deliberation around the mandates that would need to be followed to make the initiative see the light of day.

The Cheetah Conservation Fund(CCF) accompanied the feral cats as they boarded a flight from Windhoek, the capital city of Namibia, to Gwalior's Maharajpura airbase. They landed at their destination sometime before the clock struck eight in the morning. As per initial plans, the landing was scheduled for 6:30 A.M., but the formalities associated with the challenging project led to some delays. An Indian airforce helicopter then carried them to their new home, Kuno-Palpur National Park in Madhya Pradesh.

The cages they were carried in were spacious, equivalent to dimensions of 114cm by 118cm by 84cm. Dr. Laurie Marker, an American zoologist who happens to be the founder of CCF and a leading activist with a demonstrated history of conserving large cats, travelled along with the animals. The team also included three veterinarians to be put to use if the cheetahs displayed health concerns during the journey.

The animals were not tranquillized and were given very mild sedatives, as was intimated by S. P. Yadav, a National Tiger Conservation Authority member. J.S. Chauhan, a conservator known to work in the forests of Madhya Pradesh, conveyed that the cheetahs were not given any food before or during the transit. This was because a full stomach would increase the chances of nausea. To evade the same, they were fed well long before the travel date.

Furthermore, a week before the project culminated in a success, Chief Minister Shivraj Singh Chouhan had surveyed the area where the Prime Minister was seen releasing the cheetahs three day ago. Additionally, enclosures were made, keeping in mind the elaborate protocols that suggested that the cheetahs needed to be held in quarantine for 30 days after being released into the new area. They were also kept under supervision without any outside contact for 30 days before they boarded the plane.

The protocols devised to assist the translocation were not limited to the time leading up to the event. A team of scientists trained in Namibia has been entrusted with the task of overseeing the smooth acclimatisation of the cheetahs in the Indian ecosystem. The Cheetah Conservation Fund would be stationed at Kuno to facilitate the rehabilitation process. The Union Environment Ministry also conveyed that of the 25 villages residing in the Kuno National Park, 24 have been relocated and given revenue status. The village people have also been assured of compensation if domestic animals are hunted down by the cheetahs in the future.

Moreover, this happens to be the world's first intercontinental transfer of large carnivore animals. Consequently, the programme has had the forest department come up with mandates to be followed, keeping the best interests of the animals in mind. Once the quarantine is over, the wild guests will be introduced to 6 sq. km of forest land, free of predators, before they can explore the vastness of the national reserve. As reported by One India, the smaller enclosures have been equipped with electric fencing to keep wild animals at bay. They would be monitored through CCTV and have radio belts around their necks. Earlier, the prey base of the area was also enriched as a spotted deer, a nilgai, and the like were introduced into the enclosures.

It must be kept in hindsight that cheetahs have been extinct in India since 1952 owing to habitat loss and illegal hunting. In that respect, the full-proof arrangement that has accompanied the transit testifies to a refreshing eco-driven conservation approach. With more cheetahs in line to be transported into the country in the near future, India can expect a rise in predator numbers, fulfilling the envisioned purpose of creating a meta-population. Perhaps the meticulous planning and protocols involved in the task reflect India's determination to right the wrongs that led to the extinction in the first place.

A Homage For The Indigenous; Securing The Rights Of The Guana Yala Peoples