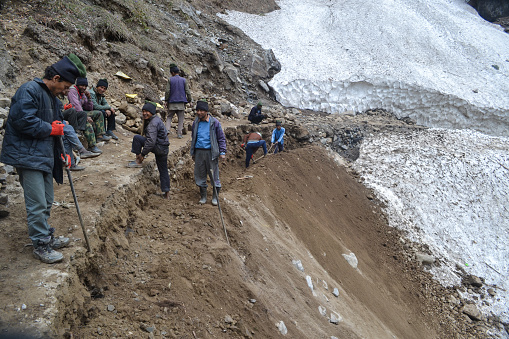 For the past few days, we have all been hearing some dreadful news about floods in some districts of Uttarakhand. Almost 64 people lost their lives in the Chamoli district on account of excessive rainfall and floods. This has caused huge trouble for life and property. Experts suggest that floods are the result of climate change in the Himalayan region.

In February 2021, a part of the Nanda Devi glacier broke off, and water behind the ice was released, causing the landslide. 192.6 mm of rainfall was recorded in Uttarakhand and 122.4 mm during the hours of mass destruction. The changing pattern of the monsoon is responsible for such wrecking.

The Dhauliganga River hit the district of Chamoli, which washed away the dam at the confluence of the Rishiganga and Dhauliganga rivers. The avalanche also washed out a bridge in Tapovan, disconnecting 13 villages. Roadblocks have caused havoc in the lives of people. The rainfall in the Kumaun region breaks several records of seasonal rainfall.

The Indian Meteorological Department has issued many warnings for the nearby states as well. Some of the villagers were evacuated to minimize the threat to life. Search operations in the Uttarakashi traced two missing trekkers. An operation had to airlift the bodies of dead trekkers. Nearly 10,000 were rescued in the worst-affected region of Kumaun and approximately 500 in the Garhwal region.

A new spell of snow is going to impede the rescue operations. Trekking on the Harsil-Chitkul trek is dismissed due to bad weather conditions. The Sunderdhunga glacier operation in the Bageshwar district is also postponed. A search on foot still continues.

The geographic detail of these regions is ‘fragile’. Many residents of Reni are afraid that landslides might pave the way for rock blasting. This will also affect the construction of the hyperpower dam. A total of 140 workers are either dead or missing from the Tapovan Hydropower Plant Site. The districts of Almora and Ranikhet are completely cut off as the roads have broken down. The government is currently deploying C-130J super Hercules along with 3 teams of the National Disaster Response Team.

The state of Kerala is also experiencing massive floods this time of the year. Extreme rainfall along with a depression toss is mainly responsible for this disaster in the state. 26 people were reported dead, and many houses were devastated. The most affected areas are Kottayam and Idukki. The situation is similar in both states. 184 camps are set up to help flood victims across Kerala. Military helicopters are providing food and other essentials to the people. The Indian Meteorological Department predicted heavy rainfall in Kerala.

The unpredictability of monsoons in India is one of the biggest concerns and the reasons for such avalanches. Experts also say that the unregulated growth of dams and the diversion of rivers are causing regular floods. The roads to connect the villages are washed away. The government needs to use the armed forces up to their full potential to boost the rescue operations. The Prime Minister, Narendra Modi, sent his condolences to the families affected by the disaster.