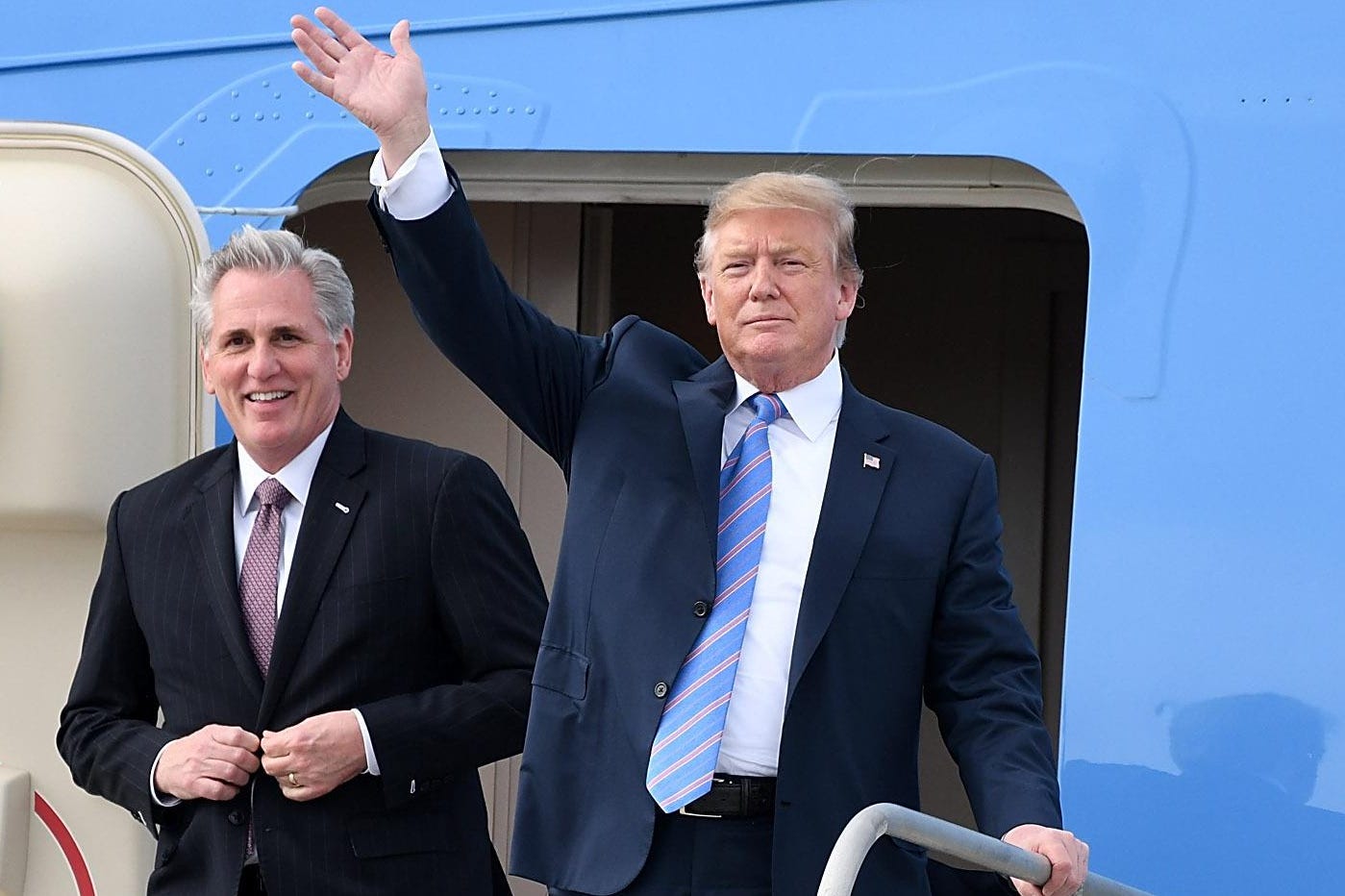 Former President Donald Trump and current House Minority Leader Kevin McCarthy (R-Calif.) that their relationship is not fractured by the newly released audio of the latter saying that he planned on asking the 45th President of The United States (POTUS) to resign over the January 6, 2021 insurrection.

In an exclusive interview with The Wall Street Journal on Friday, April 22, former President Donald Trump stated that while he was not pleased to hear about McCarthy’s comments, McCarthy ultimately never told him directly to quit.

“He made a call. I heard the call. I didn’t like the call,” Trump said in the interview, which took place at his Mar-a-Lago resort in Palm Beach, Florida.

The 45th President added that the House Minority leader quickly altered his stance once he “found out the facts” and declared his support for him, a few weeks later.

“But almost immediately as you know, because [McCarthy] came here and we took a picture right there—you know, the support was very strong,” Mr. Trump said, referencing and pointing to the spot in the room where McCarthy had taken a photo with the former president in late January 2021. The infamous image is viewed by the public as McCarthy affirming his full support for Trump, who continues to rule over the Republican Party.

On Thursday, April 21, 2022, The New York Times reported of a conference call between House Republican leaders that took place on January 10, 2021, just four days after the Capitol Riot.

“What I think I’m going to do, is I’m going to call him,” McCarthy said, according to the audio. “The only discussion I would have with him is that I think this will pass, and it would be my recommendation you should resign. I mean, that would be my take, but I don’t think he would take it. But I don’t know.”

The audio obtained by The New York Times was released by Jonathan Martin and Alexander Burns, journalists for the publication and authors of the upcoming book “This Will Not Pass: Trump, Biden and the Battle for America's Future." It is part of a series of revelations of Republican leaders’ condemnations of Trump in the days following the attack on the Capitol.

Shortly after the April 21, 2022, tape was released, both McCarthy and his spokesperson denied the allegations in a lengthy statement on Twitter.

“The New York Times’ reporting on me is totally false and wrong. It comes as no surprise that the corporate media is obsessed with doing everything it can to further a liberal agenda. This promotional book tour is no different. If reporters were interested in the truth, why would they ask for a comment after the book was printed?” McCarthy wrote as part of his lengthy statement posted on Twitter.

In response, The New York Times published the audio clip of the January 10, 2021, conference call, which corroborated the publication’s reporting.

The following day, on April 22, 2022, The New York Times shared another audio recording, this time of a Republican conference call that took place on January 11, 2021. The audio features McCarthy telling fellow House Republicans that then-President Trump acknowledged some responsibility for the Capitol Riot, which left five people dead, including one police officer (the death toll would rise to nine after four police officers defending the Capitol that day committed suicide within the seven months following the insurrection).

In response to the audio released on April 22, Trump denied that he claimed responsibility over the events of January 6, 2021, in the interview with The Wall Street Journal.

The released audio recordings could threaten McCarthy’s chances of becoming Speaker of the House of Representatives should Republicans win control of the House in the upcoming November 2022 midterm elections.

McCarthy has been working actively behind the scenes to contain the fallout over the leaked audio clips. CNN reported that the House Minority leader spent most of his Friday calling key House GOP representatives and spoke with former President Donald Trump two times.