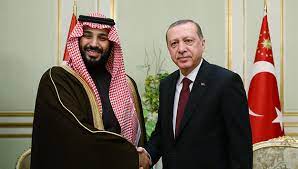 The Turkish President, Recep Tayyip Erdogan, met with the Saudi Crown Prince, Mohammed bin Salman, in Ankara on Wednesday, June 22nd. The event aims to resume relations between the two countries after the controversial murder of Saudi journalist Jamal Khashoggi.

A renewed communication channel between Turkey and Saudi Arabia is a win-win situation for both states. Erdogan is looking for allies to strengthen the Turkish economy before the new presidential elections that will take place in 2023. Saudi Arabia is exploiting its oil wealth to quell criticism about human rights violations. The first result was lifting the ban on flights, trade, and TV series. Negative media coverage has also ended.

With this meeting, the Turkish President is trying to open the country regionally and internationally after years of confrontational foreign policy in the Middle East. Not coincidentally, he flew to the UAE in February 2022 to resume ties that had been strained since the 2010-2011 Arab Springs events. Accordingly, due to their starkly divergent philosophies, Turkey and the UAE were placed on different sides regarding regional conflicts in the Middle East for years. Erdogan and his pro-Muslim Brotherhood AK Party have sponsored political Islam groups in many nations in the years following the Arab Spring, which was considered a danger to Gulf monarchies like the UAE. After Erdogan’s recent visit, 13 agreements covering several sectors, like technology, defense, and trade, have been successfully signed.

The same approach was recently applied to Israel. The two countries have been working to restore their ties on a diplomatic level. In the past, they both expelled each other’s ambassadors due to divergent opinions on the Israeli-Palestinian war. On June 23rd, a meeting in Ankara was organized between Turkish Foreign Minister Mevlut Cavusoglu and Israeli Foreign Minister Yair Lapid. They talked about strengthening cooperation between the two countries concerning Israeli citizens living in Turkey. Accordingly, fears of Iranian attacks and abductions at their expense have pushed Ankara to take measures. Economic cooperation was also on the agenda.

Turkey also sought to amend its relations with Egypt. Fractures occurred after the 2013 coup that ousted the Turkish-backed President Mohamed Morsi and placed Abdel Fattah el-Sisi in power. On June 1st, the situation seemed to be reversed as Turkey's Finance Minister, Nureddin Nebati, visited Egypt on 1 June.

With the recent meeting with Saudi Arabia, Erdogan hopes to inject new capital into the suffering Turkish economy. Despite the Turkish economy growing by 11% in 2021, the implementation of interest rate cuts, while supporting demand also contributed to the amplification of macro-financial instability. This, along with the economic consequences derived from the Russo-Ukrainian war, dealt a blow to the country’s economy. Rising food and energy prices are expected to further deteriorate the situation. Also, as domestic reforms slowed down, the private sector was severely hit by debts, persistent current account deficits, inflation, and unemployment.

The Turkish lira is facing hard times right now. This currency experienced its biggest decline and became more exposed due to a sharp decline in the central bank's reserves, failed monetary policies, and confrontation with the nation's NATO allies. It is currently performing the worst against the dollar, falling as much as 1.5% to its lowest level in five months.

Despite Erdogan’s hopes to reach some sort of financial deal with its Saudi counterpart to boost the Turkish economy, no signs of agreement could be seen. The Turkish President failed to secure capital from Saudi Arabia. Accordingly, in their joint written statement, there is no mention of any currency swap agreement or closer cooperation between the two countries’ central banks.

Moreover, the Turkish President must face domestic disappointment as many Turkish citizens did not applaud this rapprochement. In their memory, the murder of the Saudi journalist Jamal Khashoggi is still fresh, as well as other human rights violations. A poll carried out recently on Twitter was very clear in this regard. When it comes to Saudi Arabia, 60.3% are against getting closer to it.

The recent news about halting the trial where 26 Saudi nationals were being prosecuted over the killing of the Saudi journalist infuriated Turkish public opinion. The judge said that now the trial will be transferred to Saudi Arabia due to the defendants’ absence. The journalist, considered a dissident by the Saudi authorities, was killed in 2018 in the Saudi consulate in Istanbul.

After supporting several international efforts demanding that justice be done, Erdogan's recent turnabout did not please many people, both domestically and internationally. Nevertheless, faced with an economy declining at a staggeringly fast pace and the upcoming presidential elections, the Turkish leader opted for a more inclusive opening into the Middle East. This, of course, could be a double-edged sword for the already damaged reputation of the country in the human rights sector.

Who are the terrorists in Yemen's conflict?