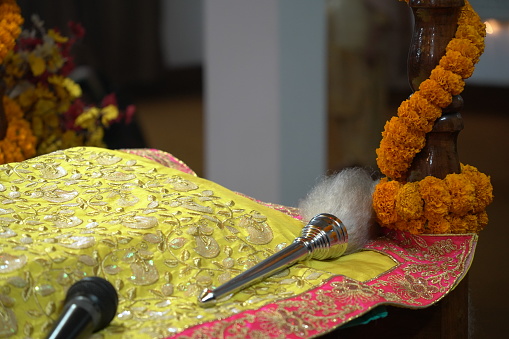 Two men were lynched within 24 hours in the Golden Temple, Amritsar and other at Nizampur village of Kapurthala after being alleged of indulging in desecration of the Guru Granth Sahib and Nishan Sahib.

The first incident took place on the evening of 18th December during an ongoing prayer, where a 24- to 25-year-old man was seen jumping over rails guarding the Guru Granth Sahib (holy book) of the Sikhs and grabbed a sword to desecrate the holy book. The incident was recorded on the CCTV camera.

According to ANI, the accused was seized by the Sang at Personnel and was killed in contretemps by the people.

Another such incident took place on Sunday morning (19th December) in a gurudwara in Kapurthala.

According to ANI, a special investigation team is formed by the Punjab Government to look into this matter of violence.

The second incident recorded a man trying to desecrate the” Nishan Sahib” (holy symbol of the Sikhs) by removing the Sikh flag. The video of this incident also went viral.
In both these incidents, the accused were beaten to death by the angry public for performing this Sacrilege Act.

Punjab chief minister, Charanjit Singh Channi said some “bad elements” could be behind Saturday's incident ahead of the assembly elections in Punjab next year. “Our agencies are conducting a probe,” the chief minister added in a conversation with the reporters.

According to the media, initially the man was taken into custody by the police. The clashes with the police ended up killing the man.

According to ANI, Punjab chief minister, Charanjit Singh Channi tweeted “We appeal to the people of the State to respect & protect the religious centers of all religions, maintain communal harmony. It might be that some bad elements are causing this as Assembly elections are nearing. Our agencies are conducting a probe”.

According to ANI, Punjab CM Charanjit Singh Channi further tweeted, “State intelligence agencies and the police force are engaged to avert such acts of anti-social elements. People should remain vigilant and extend wholehearted support and cooperation to the govt in maintaining law & order”.

Balwinder Bhunder, an MP for opposition party Akali Dal, condemned the latest incident on Saturday, telling local outlet NDTV that it was a deliberate attempt "to weaken Punjab, which is the sword arm of India".
"Some people have made it a political game over the last five years," he added.

An FIR has been registered by the police under sections 295A and 307 of the Indian Penal Code (IPC) against an unknown deceased accused who was alleged of deliberate and spiteful intention of outraging the religious feelings and attempt to murder.