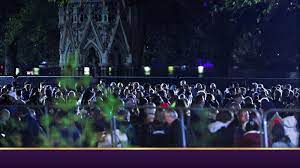 The offender, Adio Adeshine, allegedly exposed himself on Wednesday evening.

Witnesses claimed  he went into the River Thames in an attempt to avoid police officers, before coming out and being obtained.

After appearing at Westminster Magistrates' Court, he was charged with two counts of sexual assault and two counts of breaching a sexual harm prevention order.

The first victim stated she could feel something touching her back then saw he had exposed himself.

Adeshine was also seen revealing himself to another woman before security and the police were called.

He reportedly threw his phone in the Thames before entering it, and was shortly arrested afterwards.

He was pleading not guilty to the charges.

"The defendant was part of the queue to see the resting in state of Queen Elizabeth II."

Victoria Tower Gardens, where the incident happened, now has a five-mile queue of mourners.

The victims are said to be in a good state after pressing charges against the offender.