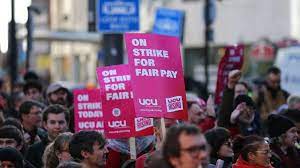 The University and College Union reported that 70,000 employees spread out through 150 UK universities will go on strike on February 1. They will participate in a coordinated day of strikes organised by the Trades Union Congress, which represents the majority of unions in the country. Workers from other sectors, including train drivers, government employees and teachers will also be joining the strike.

Three days of industrial action have already been taken by university personnel this academic year in response to a 3% wage increase that union members rejected. Staff were frustrated with receiving an income less than inflation rates and have decided to take action.

The Universities and Colleges Employers Association proposed an amended 4-5% pay increase offer for their university administrators last week, however this was declined by UCU.

The offer, according to the UCU, is insufficient to counteract the rising rates of inflation and employees should instead receive a 7% salary raise.

In the past two years, several academic employees, such as administrators, librarians, and technicians went on strike. In November, university employees went on strike for three days, but no positive improvement was made leading to the strikes happening this week.

The 3% wage rejected raise for this year is significantly less than the current Retail Prices Index (RPI) inflation rate which is 14%. Union members are hoping for the strikes to address the low pay but also the "excessive workloads" that lead to hours of "unpaid work." Additionally, many employees are contesting the usage of brittle, short-term contracts.

The UCU is striking for two reasons, inadequate pay for nearly a decade and enhanced employee protections.

The union claimed that staff have seen a 25% real-term decrease in compensation between 2009–10, owing it to the succession of below-inflation pay awards.

It proposes that 145 institutions create a framework to eradicate unstable employment practises and give staff employees large compensation increases to help them cope with the rising cost of living, including temporary and zero-hour contracts.

Additionally, the UCU is engaged in a pension dispute with 67 institutions over members' demands that employers reverse pension plan changes and bring payouts back to levels from 2021.

According to the union, a typical employee will lose 35% of their guaranteed retirement income as a result of the cuts, which were implemented in response to a 2020 evaluation of the programme that revealed a £14 billion deficit. The losses for people just starting their careers are in the hundreds of thousands of pounds.

Although data indicates that pension benefits could be reinstated for lesser payments and yet leave the scheme in surplus, the union claimed the scheme is now "doing so well that the deficit has evaporated" and that it is now reporting a £1.8bn surplus.