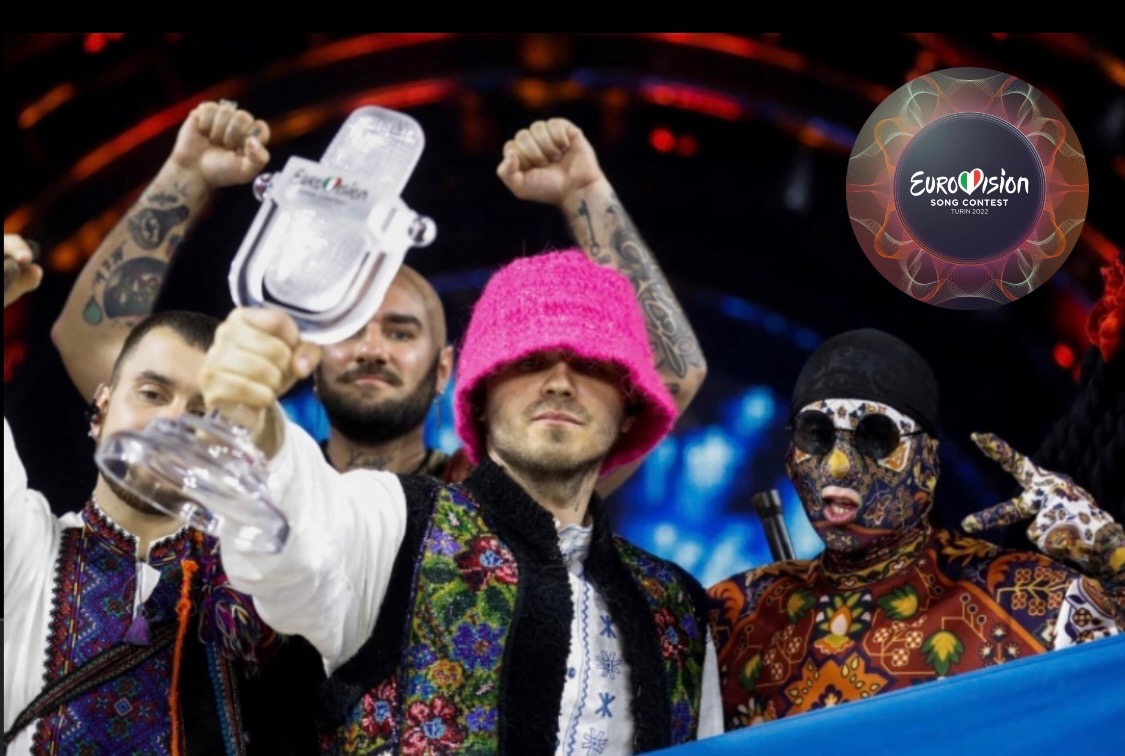 Ukraine won their third victory at the 2022 Eurovision Song Contest with their entry Kalush Orchestra.

The band is known for mixing aspects of traditional Ukrainian folk music with contemporary rap and hip-hop. The winning song originally honoured frontman Oleh Psiuk’s mother, but it was rededicated to rally Ukraine amidst the Russian invasion. Psiuk stated ‘with the war and the hostilities, it took on additional meaning…many people started seeing it as their mother’. At the end of the performance, the group pleaded ‘Please help Ukraine, Mariupol. Help Azovstal right now’.

Several artists expressed their solidarity by making small statements on stage and waving or wearing the Ukrainian flag. The European people echoed this sentiment with a massive show of support in the public votes that gave Ukraine a combined total of 631 votes and shot them to the first position on the leader board.

Timur Miroshnychenko, the Ukrainian commentator, was forced to present from a bunker in Kyiv due to the chance of Russian artillery and fears the broadcast would be interrupted. Kalush Orchestra had been given special permission to temporarily leave the war-torn country and travel to Turin for the competition. The Winners told in a news conference that they will quickly return home to Ukraine to fight.

Ukrainian President Volodymyr Zelenskyy, who watched the contest from an air raid shelter in Mariupol, hailed the victory and paid tribute to his countrymen. He also vowed on social media that Eurovision would be held in a rebuilt and peaceful Ukraine.

The UK’s Sam Ryder narrowly missed out on becoming his country’s sixth win since 1957 and the first since Katrina and the Waves won in 1997. He was predicted to be a favourite ahead of the contest but ultimately came in second place.

Ryder’s entry, a powerful Ballard called Space Man, topped the jury vote after receiving 283 points. However, the performance was beaten by Ukraine when the song came fifth in the public vote round. The UK finished the night on 466 points.

The second-place position reversed a long period of Eurovision misfortune for the UK. It managed the country’s best result since 1998. The nation has placed last five times since then, including last year when Embers by James Newman scored zero points.

Before the event, Ryder said he was not concerned with where he would finish, as he prefers to focus on the togetherness Eurovision celebrates rather than the scoreboard. He has since expressed he is ecstatic with coming second and he is excited to see what the UK brings to the competition next year. He thanked his fans and showed his love for the winners on his Instagram page.

The BBC’s commentator for Eurovision since 2009, Graham Norton, stated ‘I am so happy for [Sam], for the UK and for the BBC who have worked so hard to turn our fortunes’.