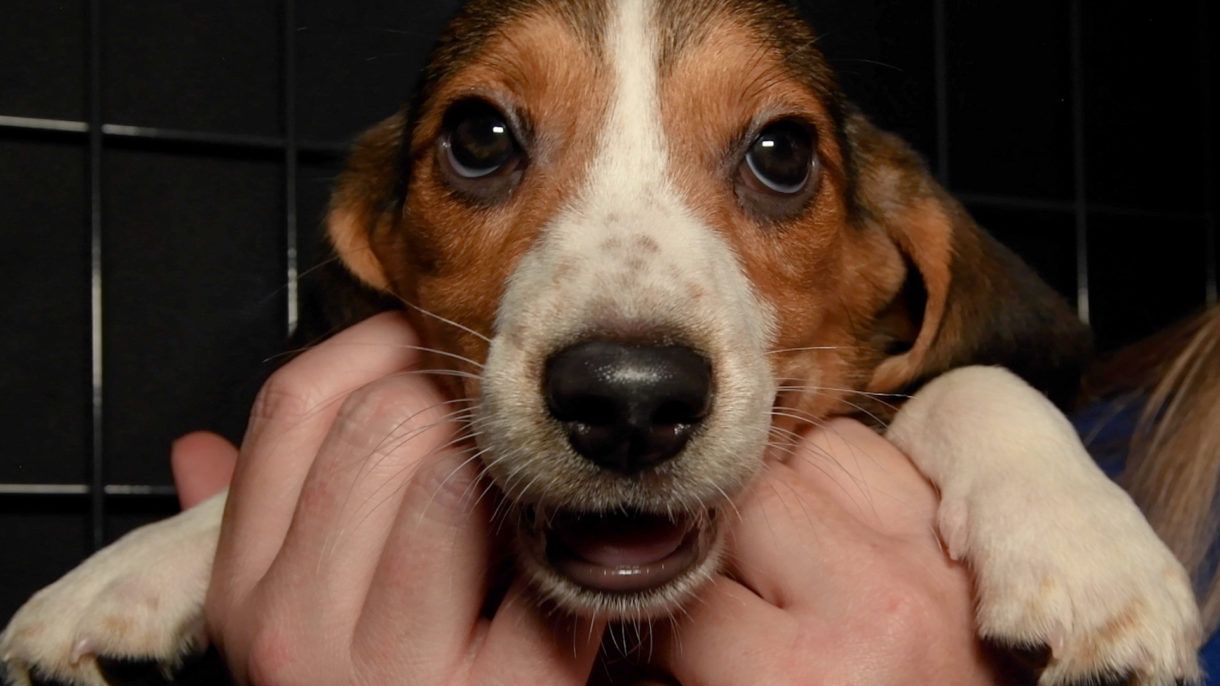 Charlie is a puppy beagle bred to be a test subject for a large-scale lab before the United States Humane Society rescued him and nearly 4,000 other beagles from a breeding facility in Virginia. The breeding facility would have sold Charlie as a puppy to a company that would use him to test chemicals, drugs, or medical devices.

Dogs living in laboratories are not named but rather tattooed with a number. They are force-fed chemicals such as pesticides or implanted with medical devices and then overworked to test them. Eventually, these dogs are typically killed after the trials to examine their bodies to determine the products' safety.

Beagles at the animal testing facility suffered from awful conditions. The conditions included being killed instead of treated for easily treatable diseases, being denied food, and food containing maggots, mold, and feces. Puppies died from cold exposure, and other dogs suffered injuries from dog fights due to overcrowding. The animal testing facility violated various rules of the Animal Welfare Act.

Over one month ago, The United States Humane Society's Animal Rescue Team started removing 4,000 beagles from a breeding facility in Virginia.  Nearly 3,000 beagles have been removed from the testing facility and sent off to one of 75 different shelters or rescue centers. Since the rescue, the Humane Society and its team have been trying to find permanent homes for the newly freed beagles.

Helen Woodward Animal Center, located in California, was one of the first locations to receive the rescued beagles.  The center took in 43 beagles.  Each beagle was put into a foster home where they learned how to socialize and act as ordinary pets.

“It was the first time (the beagles) had ever received love, toys, treats, or even stepped in grass,” said Monica Petruzzelli, the PR Manager of Helen Woodward Animal Center, via email.  “The foster families offered them a comfortable space while they adjusted to the real world and received medical care.”

One of the Humane Society's top priorities is ending animal testing in laboratories. The Humane Society advocates for an adoption bill to save laboratory test subjects. After their testing trials, the animals would have a chance to live as ordinary pets rather than be killed. Legislation has been passed in 15 different states but not nationwide.

In a Gail A. Van Norman, M.D. study, Norman found that human and animal toxicity levels are not closely correlated. Preclinical and clinical trials fail nearly 90 due to toxicity in the drugs, and roughly half of the failed tests in human trials happen after no toxicity was found in animal test subjects. Animals and humans do not have similar toxicity levels, so clinical trials found a drug safe for animals but toxic to humans.

The Humane Society is pushing for alternative testing methods that are safer and modern that will help end animal testing in laboratories. For example, new ways can use modern technology that uses human skin cells and tissues to mimic how a human body would react to drugs, chemicals, or treatments.

According to the Humane Society, Alternate testing options include using sophisticated computer models, cells from a cancer patient's tumor, skin cells, and other modern options.  Advanced testing options are possible but expensive, require funding, and require government agencies to approve.

Saving the beagles has been the most extensive and historic single rescue effort in the history of the Humane Society. Four thousand beagles destined to live in a lab will now have opportunities to live as pets with loving families.

The rescue mission started in early July. Now almost 3,000 beagles, including Charlie, have been moved to new rescue locations, where they will begin their new lives, eventually being adopted and living in homes rather than laboratories.

Image of Charlie the beagle from the United States Humane Society.