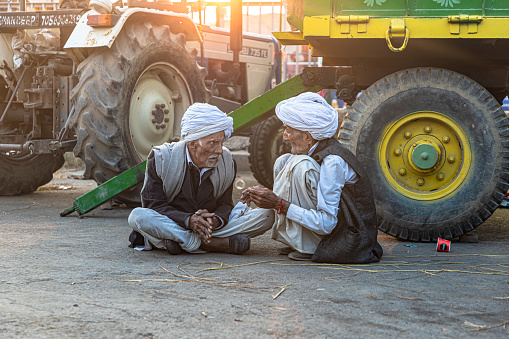 Farmers claim that on Sunday two SUVs ran over and crushed two farmers and injured many who were protesting against the visit of Deputy chief minister Maurya in Lakhimpur Kheri. The convoy was allegedly linked to the Union Minister of State for Home Affairs Ajay Kumar Mishra.

The car was seen driven by the MP’s son Ashish Mishra according to several protestors, including members of Samyukta Kisan Morcha (SMK), a forum of more than 40 farmer unions. While 2 have been allegedly dead, unofficial reports have also stated that one farmer was shot dead by the minister’s son Ajay Mishra who was also seen seated alongside his brother.

Samyukta Kisan Morcha spokesperson Jagtaar Singh Bajwa, said, “In Lakhimpur Kheri’s Tikunia area, farmers were protesting peacefully. The Union Minister of State’s son ran his car over them. In the incident, several farmers are injured and some have died.”

“This is proof of the authoritarian government of India. That people do not have the democratic right to protest peacefully,” he added.

According to the reports, the following events unnerved the farmers who later stopped the two vehicles and set them on fire. The protestors have demanded legal action against the MoS and his son and also to eliminate the minister from his post.

Dr. Lalit Kumar, the health officer of the district hospital in Lakhimpur Kheri, said that two farmers were dead till the time they arrived and one had severe injuries. "No postmortem has been conducted. They want the Union's go ahead," he added.

The farmers were holding a peaceful black flag protest against the deputy chief minister in the Tikunia area, where this incident occurred. The protestors were agitated by the statements of Ajay Mishra Teni, who in a speech last month threatened the farmers only. He told the farmers to get a hold of their behaviours.

“Why has the farmers’ protest not gotten attention in Lakhimpur? Because there are only 10-15 people protesting against the laws. If the farm laws were so bad, the protest would have caught on. I would say ‘sudhar jao’ to these farmers,” he said. This was recorded in a video that went viral.

The Deputy chief minister was supposed to attend an event held by Mr. Mishra in his village. The farmers had gathered at the spot where the helicopter was supposed to land. Hundreds of farmers assembled at the helipad to prevent the landing. His visit was cancelled following the circumstances.

"The farmers had planned to block a helipad to stop the Deputy Chief Minister from getting off. Once that programme ended and most people were on the way back, three cars came... and mowed down the farmers... one farmer died on the spot and another in the hospital," said Dr. Darshan Pal, a leader of the farmers' union.

Official statements from the BJP leaders are awaited, though, in a phone interview taken by a Hindi news channel namedNews1 India channel, Mr. Mishra stated that the driver of the car who was going to receive Mr. Maurya from the helipad was hit by a stone. He added that the driver was injured and died which led to a loss of control of the car which caused the “accident”.

"Someone pelted a stone at the driver, he lost consciousness and died. He lost control of the car which caused an accident...some people were injured in the incident and some lost their lives," the minister said.

Rakesh Tikait, the leader of Bharatiya Kisan Union (BKU) said that the farmers were hit by the car when they were returning. He added that gunshots were fired at them. He had gone to Lakhimpur Kheri from Ghazipur to ascertain the situation.

The confirmation on these reports has yet to come by the administration.