Updates On The Russian Invasion Against Ukraine: The Kerch Bridge Explosion 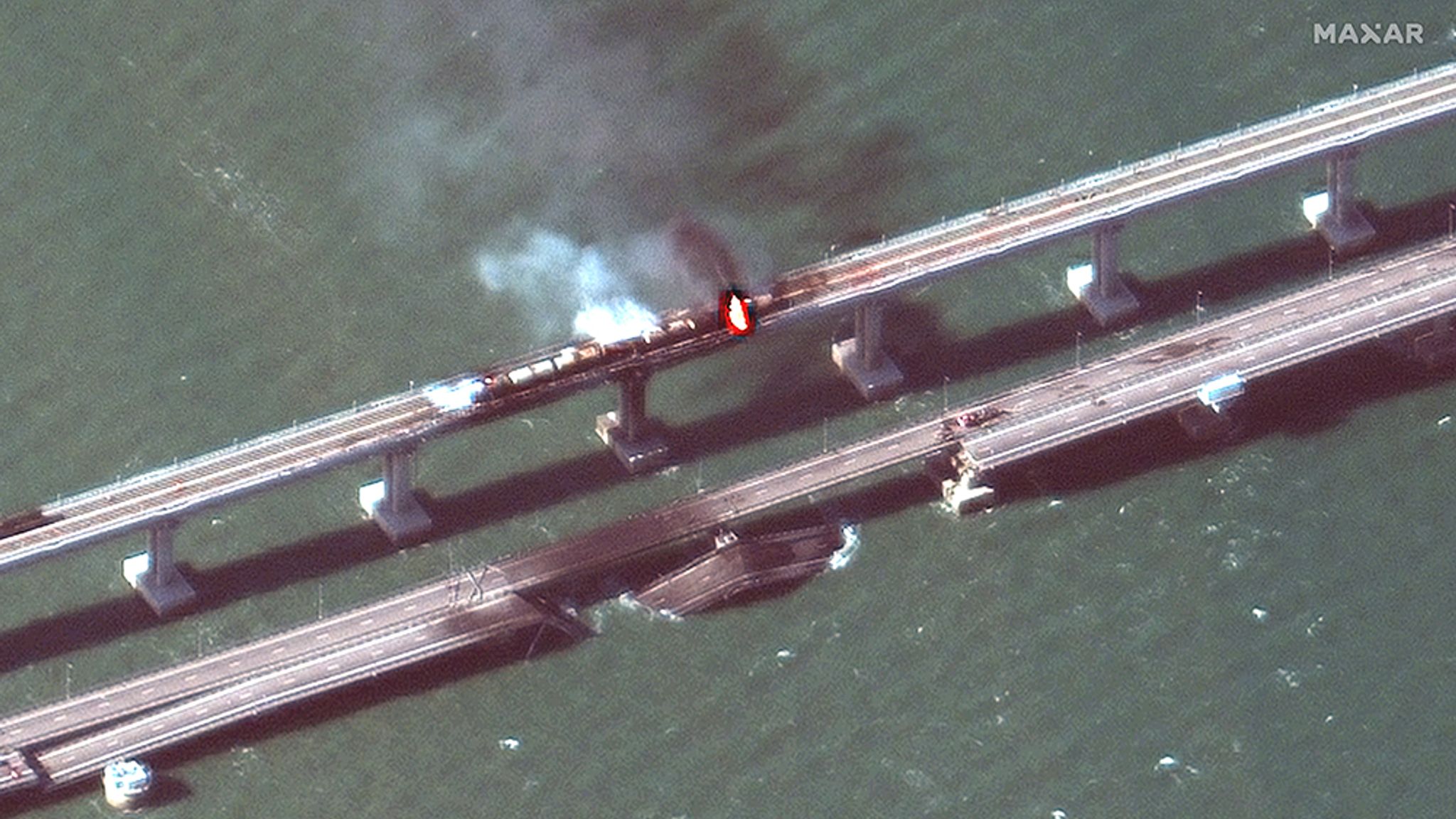 At approx. 6AM, a single explosion detonated beneath a four-lane road causeway crossing the Kerch Strait, about 1.5 kilometers south-east of the Crimean shoreline, as seen from various witnesses and social media footage. The blast destroyed the two westbound lanes, dumping five meters of roadway into the Azov Sea. The two eastbound lanes had visible surface damage. Russia has accused Ukraine of carrying out the attack in retaliation to President Putin’s claims that Monday's deadly missile strikes targeting Ukrainian cities were in retaliation for Kyiv's "terrorist action" against Russian territory.

To recap, Russia’s most widespread and brutal attack as of late on populous Ukrainian cities (Kyiv, Lviv, Ternopil, Zhytomyr, Dnipro, Kremenchuk, Zaporizhzhia, and Kharkiv were named) on Monday killed at least 11 people were killed and scores injured, as well as disrupt electricity exports. According to Reuters, Ukrainian military intelligence revealed that "the objects of critical civil infrastructure and the central areas of densely populated Ukrainian cities were identified as targets.”

Since then, the National Public Radio tells that the Russian Federation has stated to having detained eight people that it suspects in carrying out last Saturday's explosion on a key bridge linking annexed Crimea to Russia. Ukraine has not officially confirmed its involvement in the blast, but it's safe to say there are Ukrainian officials that have celebrated the damage.

Following the blast, Mykhailo Podolyak, an adviser to Ukrainian president Volodymyr Zelensky, tweeted that “Everything illegal must be destroyed, everything that is stolen must be returned to Ukraine, everything occupied by Russia must be expelled.”

The chair of Ukraine’s national security and defence council, Oleskiy Danilov, tweeted a video of damage to the bridge side by side a video of Marilyn Monroe singing “Happy Birthday, Mr President”, in a barely veiled dig at Putin.

Whether the damage was accidental or calculated, there is no doubt that this clouds the ongoing Russian stance that they have the upper hand in the conflict, especially after several major defeats in battle and rather devastating setbacks.

To recall statements from 2014, “The bridge represents not only an attempt by Russia to solidify its unlawful seizure and its occupation of Crimea, but also impedes navigation by limiting the size of ships that can transit the Kerch Strait, the only path to reach Ukraine’s territorial waters in the Sea of Azov.”

Though the physical bridge is reparable in a matter of days, the critical hit that this poses on their symbolic dominion over Crimea is going to be difficult to recover from. The bridge was the physical expression of Putin’s objective to bind Ukraine to Russia (in line with the nationalistic sentiments of the русское единство, or Russian Unity).

Aside from the bridge, there is no continuous road or rail link between Crimea and the Russian mainland, which is home to the Russian Black Sea fleet and dozens of critical RF military air bases and supply bases. Rail lines running north from Russian army warehouses in Crimea provide critical food, ammunition, and supplies to Russian army and air force units fighting in Ukraine's southern Kherson and Donetsk regions.

May readers remember that when Russia annexed Crimea in 2014, the international community did condemn its actions yet did little to actively oppose them. The Ukrainian attack on the Kerch bridge came after weeks of RF-launched strikes on Ukrainian targets.

The tide of the war has shifted noticeably; the war continues to escalate yet Russia’s confidence wanes.