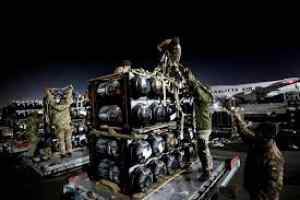 The United States and Germany on Wednesday pledged to supply advanced weapons to Ukraine, which, according to the Associated Press, wants to shoot down aircraft and neutralize Russian artillery.

The United States has said it will supply four medium-range rocket systems and ammunition, while Germany will supply anti-aircraft missiles and radar systems.

By providing these rocket systems, the U.S. is trying to help Ukraine in its quest to deter Russia from further attacks.

The Pentagon says Ukraine will not use new rockets to harm Russia.

The Kremlin accused the U.S. of “pouring fuel on the fire.”

Western weapons were vital to helping Ukraine repel an attack by a much more powerful Russian military force that eventually forced the Kremlin to shift its focus to the Donbas region.

The new weapons could help Ukraine hit Russian artillery and establish new lines of defense in the past that continue to tear apart nearby cities.

Germany is receiving some criticism from its own people for not doing enough.

By sending the IRIS-T air defense system, it will signal the first shipment of long-range air defense weapons since the start of the war.